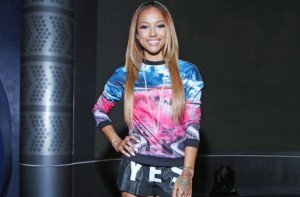 Did you notice 106 & Park did not air yesterday? The sudden change happened after the Karrueche Tran/Blue Ivy fiasco. During her first TV co-hosting opportunity, Karrueche began the “Top Six Things Blue Ivy Thought at the VMAs” list. She read from the teleprompter, “I really did wake up like this because my parents didn’t comb my hair. Sorry Blue. I love you”. *Awkward Silence* The script was said to have been altered 10 minutes prior to the show airing, leaving Karrueche defenseless. Though Karrueche did not write the script, many argue she should have respectfully declined the joke.

Beyonce’s #BeyHive quickly stung with no signs of mercy. Karrueche has been slammed by angry fans on social networks, as well as, by the media. Blue Ivy’s parents are arguably the most accomplished living artists in Urban and Pop culture. Stephen Hill, BET’s EVP of Music Programming tweeted, “Last night on 106 & Park there was a stupid, unthoughtful joke made about a young child…We apologize publically to the child’s parents (and have done so privately) and we have taken punitive actions with those responsible…It was very bad judgment and we will serve you much better in the future…Oh, and please don’t hate on Karrueche; it was NOT her fault. We also apologize to her for putting her in that position”.

106 & Park is suspended for the rest of the week.  Karrueche tweeted “team #BeyHive” and “Now y’all know I LOVE me some Beyonce and Blue Ivy! I didn’t write the script y’all LOL”.  This apparently was not taken as a laughing matter. The night before the (two-year-old) Blue Ivy went on stage with her father to present her mother with 2014’s highest MTV Music Award.