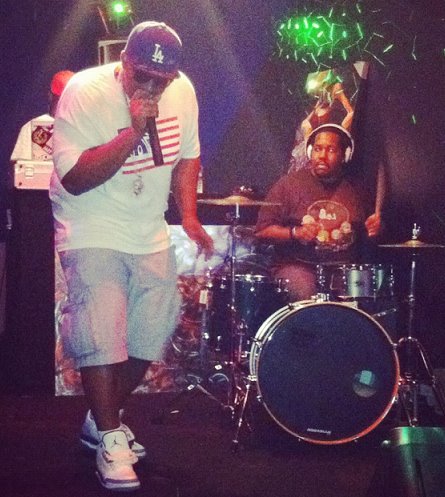 Brownsville “It’s the slum of the slums,” said rapper Brix. His demeanor is a couple decades his senior. It is difficult to imagine the dark past Brix details in his music, when you consider his solid image. The industry is known for accepting artists with imaginary street credibility; however you sense Brix sincerity when he speaks. “My city made me all that I am. It showed me the harsh realities of life. It gave me tough love which built my character,” said Brix. These harsh realities spill into his music.

His talent has graced the same stage as prominent artists Meek Mill and Kendrick Lamar. Brix’s versatile flow and unique voice paints a picture for his listeners. The Brooklyn bred rapper can get 100 Brixtape downloads in a New York minute, literally! That type of independent music hustle is currently unmatched. Whether he is exposing his divorce, charming the pants off a lady, dealing coke at age 14 to pay for an abortion or describing his battered mother, you feel every raw detail of the music. Other artists always say they’re “grindin” but in comparison to Brix have faced slight struggles prior to triumph. Brix dominates in the studio just as he has in life. “People see how I work, but in my opinion I could work harder. I believe it takes a beyond human effort to achieve what I’m setting out for,” said Brix.

With diamond teeth and a boss belly that will make your girlfriend blush, Brix the 757 party host and GranCru Music MC described his creative process. “It is very tedious and varies. Lyrics that tell direct stories from my life seem to come easiest. I’ve written songs in an hour, but then there are songs that have taken me weeks. I try to be crafty, witty and original,” said Brix. The BrixTape and BrixTape 2 Writing My Wrongs did significant numbers online. His newfound musical passion shows true potential.

Well-known urban magazine and video vixens, such as, Kyra Chaos grace Brix’s videos. The thighs on the women in the new video “Juice” prove Brix has just that. Although Brix’s mother works in the music industry, it wasn’t until his final semester of college that he jumped on the music scene. Brix said, “I was exposed to working behind the scenes in the music industry at a young age. But back then I had no thoughts or desires to pursue music as a career, so I took that inside plug for granted.” Brix’s shocking change of heart now shuts down college campuses with mainstream artist such as Miguel. Not to mention DC’s club Love and an unplugged concert put together by PR enthusiast Julia “JuJu” Jesse.

With continued success, Brix’s music tells the story of a kid from Brooklyn that grew up experiencing things that no kid should ever see. His music represents a person that beat the odds and made it out the hood. Brix did something with his life. He gives back to his old neighborhood and offers his story. “I talk to the kids on my block; I try to make them aware that the world has way more to offer than what they see in the hood. I encourage them to leave, because I think that’s what saved my life.”

Brix is as dedicated to his home as he is to his music. Through all obstacles, Brix’s greatest accomplishment his children, are what keep him motivated. These two little people are his biggest fans and keep their daddy inspired. With this type of ambition you might want to become one of the several thousand Twitter followers behind Brix. You are either going to respect his grind or get left behind.

Keep Up with Brix: