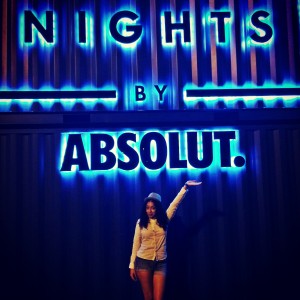 Russian-German musician Zedd has taken the music industry by storm, only being 25 years young. Hits such as “Clarity” and “Break Free” are already top ten on Billboard.  Fans were antsy outside the venue and they did not show up for any bougie shit. The line of EDM fans wrapped around the Nights by Absolut location!

Press passes were diligently issued, along with a handful of Absolut drink tickets. “Are all these really necessary?”… I wondered. It felt like trouble from the moment you walked through the long, desert-like alleyway towards the waterfront. A trippy stage was held-up by only a construction crane.  This was no ordinary event; it was a huge moshpit with blinking Absolut canister drinks.

There was no traditional lighting. Only the Absolute glasses lit-up the dark, as well as, the attendees faces. Delicious lime-juice drinks went down oh so smooth, while Arab Muzik was opening. A massive Absolut bottle shaped light-fixture was pressed against the New York City skyline. The lighting prop preserved the sexy of the outside affair.

One thing was clear, this was no ordinary night and half the crowd was going to leave trashed. As B-Boys battled, girls fist-pumped and canister drinks washed down, the momentum for Zedd built up. Attendees were reminded of the spew of hits he’s created.  After “Stay the Night” played women got loose. Zedd leaped up over his turntables and yelled “New York City I need to see your hands up to the sky right now”.  He and Absolut had the crowd literally jumping, no wallflowers allowed!