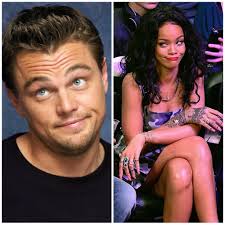 The “Birthday Cake” singer and the “Wolf of Wall Street” star keep fueling dating rumors by attending the same birthday parties — but his rep said Tuesday that he’s single and has been “for some time.”

The two were was first linked in the tabloids in January when they both hit a birthday bash at the Playboy Mansion, according to several reports. They were spotted at another birthday party at a West Hollywood hotel shortly after.

The latest b-day fiesta to kick up romantic speculation was the Barbadian beauty’s own — her 27th — on Feb. 21 at Jim Goldstein’s mansion in Beverly Hills. On Monday, a photo surfaced showing them together for the first time, E! News reported.

Now, we mean “together” in the loosest form of the word.

The photo, albeit extremely grainy and pretty innocuous, shows the “FourFiveSeconds” singer and the Oscar-nominated actor, side by side, lighting and holding cigarettes. Hey, it isn’t cake, but it’s the first time they’ve actually appeared with one another in a pic.

However, it also isn’t proof that they’re dating, despite what some reports have been touting.

A rep for DiCaprio told the Los Angeles Times that the actor “is single and has been for some time,” adding that he’s “been focused shooting” Oscar-winning director Alejandro G. Inarritu’s adventure drama “The Revenant” in Canada “for months.”

Still, the prospect of the power couple DiCaprio and Rihanna would comprise is pretty epic, and it has the gossips indulging in any and all are-they-or-aren’t-they morsels.

Sources told E! that the two were seen “kissing, touching and dancing with each other” at the private bash, which counted singer Beyonce, rapper Jay Z, model Naomi Campbell and Def Jam mogul Russell Simmons among its attendees.

People magazine chimed in with its own sources, who said that the two didn’t act “couple-y” but were “definitely flirty and dancing.”

The Grammy-winning songstress was most recently linked to recording artist Drake; DiCaprio, 40, reportedly split with model Toni Garrn late last year after more than a year of dating.

Rihanna’s rep didn’t immediately respond to a request for comment.