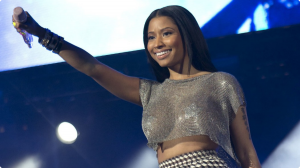 MetLife Stadium was a traditional zoo at this years’ Hot 97 Summer Jam. Def Jam kicked off the Festival Stage with the leaders of the new school, including Iggy Azalea, Jhene Aiko, August Alsina and Mack Wilds. They kept the parking lot jumping and are debatably the best freshman class at a major label. In its true jaw-dropping fashion, Hot 97 kept Hip-Hop and R&B lovers on edge.

Sevyn Streeter was the main stage’s opening act and made sure to pay homage to her incarcerated mentor Chris Brown. She fiercely danced to Brown’s Billboard banger “Loyal”. A cloud of smoke soon surfaces on the stage from none other than stoner Wiz Khalifa. Turned up, he was the first performer to get the mass heavily involved. All the old school Hip-Hop heads were in awe as legendary Snoop Dogg  joined Khalifa’s set with, “The Next Episode”.

Historically, Mister Cee has the unsurpassed classic Hip-Hop DJ set. The packed-out stadium was on its feet the moment Biggie Smalls voice played. On stage as devil’s advocate, Mister Cee flawlessly transitioned into Tupac’s “Hit Em Up”.  The audience didn’t show The Roots much love as they shadowed Mister Cee’s set. Unexpectedly, The Lox joins The Roots, as well as, M.O.P. and gaudy clapping resounds.

Angie Martinez a.k.a. The Voice of New York speaks and everyone listens. Her credibility alone can crush industry kingpin’s egos. Introducing Trey Songz formed a commotion of women awaiting his seduction. “Neighbors Know My Name,” was audio sex and yet again, Chris Brown’s, “Loyal” was played during a set.

DJ Camilo trailed Songz representing for the Caribbean kids. His Soca, Reggae and Reggeaton music had everyone acting as if they were from an island. “Twenty fucking years in the game” produced absolute chaos, as Nas and his Henny bottle appeared. Illmatic’s reproduction was just distributed and MetLife Stadium was well aware. This was the beginning of real 2014’s moments…it’s Nas!

Confused as to why Hot 97 did not push Nas back later in the show… I doubted they could top his shock value. 50 Cent comes on stage to “I Get Money” and a Source Award’s looking hood mob too. The unthinkable G-unit reunion only reiterated that Hot 97 was unfuckwitable. Like how? 50 can’t help but smell himself and Hot 97 cut off his mic. The stadium did not appreciate that, “BOOOOOOOO”!

Apparently the turmoil cleared because Funk Flex DJ’s and introduces rap virtuoso Nicki Minaj. Her perfectly perky breast are covered in awfully lucky star-pasties and the audience is drooling. She is having mic issues but continues on like it is nothing. Finally…mic clarity! As soon as she is impeccably audible it is OVER; she drops low and bounces in her Louboutin’s and bodies every verse. YMCMB newcomers join her but no Drake. “Drake I used to love you but I don’t love you no more,” says Minaj and the gathering gulps.

“Worst Behavior” drops and out comes Mr. OVO, every Tom, Dick, and Harry jumps to their feet. Lil Wayne appears and leggings begin shaking galore. Wanye spits his “Loyal” verse and everybody was waiting for the Chris Brown hologram to appear. Now on a euphoric Hip-Hop high…DJ Mustard says, “The party ain’t over”. As he closes with hits such as, “Show Me,” “Shabba,” and “Paranoid,” it becomes clear that Mustard has been involved with the entire industry.  Hot 97 truly outdid themselves. One word sums up Summer Jam… INSANE!