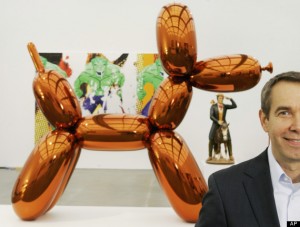 In a time where profitable artists are deceased, Jeff Koons breaks barriers. His contemporary art is full of electric colors and millenist energy. Though much of his art is child-friendly, Koons is well-known for a controversial collection. “Made In Heaven” depicted Koons having sex with Cicciolina an Italian porn-star/politician, whom he hired as a model. His art lead to a peculiar love-story as, Ilona “Cicciolina” Staller became his (first) wife following.

Always evolving, Koons produces work within series. His art opened eyes to issues of the time, as well as, personal life experiences. The current Koons exhibit at NYC’s Whitney Museum of Moderm Art welcomes onlookers to walk from his  70’s work to present time. Arguably his most note-worthy piece is titled “Balloon Dog” which sold in 2013 for 58.4 Million. “Balloon Dog” is the most expensive piece by a living artist sold at auction.

The snap-chat generation became familiar with Koons when he created complimentary art for  Lady GaGa’s “Artpop” album. This enabled his art to be in the forefront of prominent music, as Lady Gaga previously was the first woman to receive the RIAA’s Digital Diamond Award. The collision of these two world’s became a culture highlight. His exhibit at the Whitney Museum of Modern Art evokes a whirlwind of emotions. Whether you are the imaginative visionary or the confident rebel, you will be appeased.