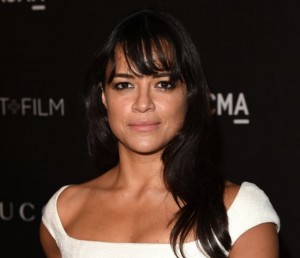 Michelle Rodriguez took to Facebook to clarity her controversial statements about minorities in Hollywood.

The Dominican-Puerto Rican actress went on a tirade last week when TMZ asked if she would be starring as The Green Lantern in the upcoming reboot of the superhero franchise.
“That’s the dumbest thing I’ve ever heard,” she responded. “I think it’s so stupid, because of this whole minorities in Hollywood thing. It’s so stupid. Stop stealing all the white people’s superheroes. Make up your own. What’s up with that?”

PLUS: The Ins and Outs of Diversity in the Dominican Republic.

Rodriguez, 36, received an outpouring of backlash over the comments, leading her to release a video apologizing for the remarks and clarifying upon their meaning.

“I stuck my foot in my mouth once again,” she said in the video, which she posted to Facebook on Saturday. “I have a tendency to speak without a filter. Sorry about that.”

In her apology, she explained that her comments had been taken out of context. “A lot of people got offended or whatever,” she said. “What I really meant was that ultimately at the end of the day, there’s a language, and that language that you speak in Hollywood is successful franchise.”

“I think it’s time for us to write our own mythology,” she continued.

The actress’s statements fail to acknowledge the fact that non-minority, white actors have been “stealing” roles from minority actors for decades. In 2014, director Ridley Scott came under fire for casting all-white actors in Exodus: Gods and Kings, a movie set in Egypt, where ancient people likely boasted a tan, at the very least.

Over the past several decades, countless works of Latino mythology have been completely whitewashed by Hollywood studios. We love Meryl Streep as much as the next person, but was she really the appropriate choice to play Clara del Valle in the movie production of Chilean author Isabel Allende’s novel The House of the Spirits? The same goes for Madonna, who played Argentine icon Eva Peron in Evita. For years, Hollywood studios have chosen to ignore Latino actors in roles intended for Latinos.

According to the 2015 Hollywood Diversity Report conducted by UCLA, racial and gender imbalances exist behind and in front of the camera, and women and minorities are underrepresented at every level. Among the ranks of top Hollywood film executives, the report states “the corps of CEOs and/or chairs running the 18 studios examined was 94 percent white and 100 percent male.” The study also found that diversity sells… big time.

The Furious 7 actress is right in one respect — we do need more people in Hollywood creating authentic minority stories. But, we also need more CEOs and movie executives willing to greenlight these projects and cast minority actors, directors, and screenwriters. We need more audiences willing to spend their dollars to support minority projects. Are you in?
-Via Latina