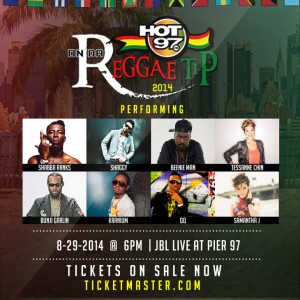 Hot 97 brought it’s annual “On Da Reggae Tip” outdoors for the first time, to JBL Live at Pier 97. On Da Reggae Tip was the equivalent of a caribbean Summer Jam. The station never cuts corners on their festivities bills, and 2014 was no exception. #ODRT headliners were Jamaican legends Shabba Ranks and Beenie Man.

Attendees were ready to  jump up and wave. Beautiful women showed all their island curves, while men threw-back Red Stripe. Vendors were selling traditional foods, including, roti and fish treats. Some of dancehall music’s most tremendous acts got extra lusty, guarantying some action at the “after party”.

Red Rat made a cameo for the newly sampled “Tight Skirt” and Maxi Priest swooned us with his unexpected appearance. Sanchez and his classic, “Baby Can I Hold You”, made the crowd wonder how Hot 97 got all these artists to perform. Bunji Garlin brought the soca energy with, “Down in the Ghetto”, but the audience began to get impatient with the venues sound system. The performers kept losing their mic’s volume. Ugh! Even Beenie Man made Hot 97 start his set over (rather annoyed) on stage.

As any true performer would, Beenie Man continued on with “King of Dancehall”. The crowd went nuts and sang profusely.  However, Beenie Man didn’t refrain from having the audience yell “Fix that shit” towards production techs. It seemed Beenie Man wanted to make sure the music was perfectly leveled for his surprise guest, Ashanti. New York City has not seen her perform at an event this big in a while. Lets just say things with her got steamy.  Ashanti was twirling around in her pum pum shorts like she intended to get some bills paid.

The Emperor of Dancehall followed and he hasn’t lost his touch. Shabba Ranks may have cross-genre success but he is Jamaican to the core. He performed “Dem Bow” as if it were 91′. At nearly 50, Shabba Ranks dances with the enthusiasm he owned at 25. “That man needs to be the Viagra spokesman”, yelled a radio rep. The NYC audience screamed his name like they would Hov’s, during”Mr. Loverman”. The young generation is now familiar with The Emperor after A$AP Ferg released the “Shabba (Remix)”.  The “Shabba” video featuring A$AP Rocky, has nearly 30 million impressions. This made “Shabba” the perfect way to close the show…with NYC turnt up!