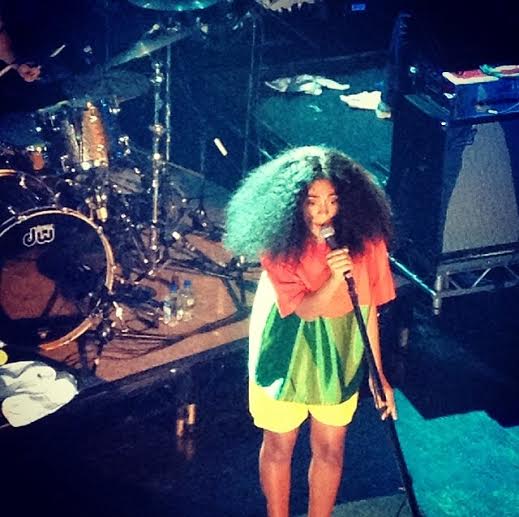 The line of hipster kids and flamboyant fashion wrapped around the Manhattan venue. One thing became clear as restless fans badgered the bouncers… these two musical mother’s remained queens of the underground. The battle through security was well worth the wait, as the color-blocking goddess Solange twirled her hips across the stage and spun around in 6 inch pumps.

Representing modern neo soul with her angel voice and retro afro, Solange owns the stage.  With only her live band she captivates the crowd with perfectly synchronized choreography.  Unapologetically outspoken, Solange explains the story behind hits such as “I Decided, Pt. 1”. Her set represented both emotional highs and lows; all women have faced the inevitable battle of falling for an indecisive man.  The crowd favorite “Tony” represents that struggle and her off-key audience resonated wall to wall. Webster Hall was just getting warmed up because what felt like an intimate theatre performance was about to become a full-on rave.

M.I.A. and her trippy, molly-friendly, rainbow stage set-up created total mayhem. She walked out in an orange jumpsuit, a pair of sunglasses and wheat boots looking more badass than your boyfriend.  The foreign queen of cool made heavily Indian influenced music popular in America. “Believer” blast and M.I.A. drops low and twerks across her neon stage. Everything from her albino b-boy and reggae dancing hype-woman, makes M.I.A. incontestable. She raps in her eerie tone and causes a venue riot.

Chaos breaks in the pit below and her devotees began throwing themselves on stage. Instead on halting the show, M.I.A. and her dancers began pulling fans on stage. It was bizarre! Her mainstream hit “Paper Planes” begins to play and M.I.A. is anything but Hollywood. She and her mob rock together and close out the show. Simply put… if you were not at #VultureFest you just weren’t there.