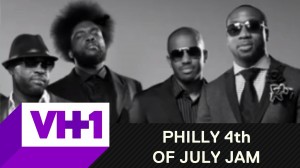 A massive crowd flooded Benjamin Franklin Parkway; all of Philadelphia was downtown. The Roots and Marlon Wayans hosted the family-friendly, all-star Independence Day line-up. Jennifer Hudson and her infamous voice made it impossible for even Mayor Michael Nutter to stay in his seat.

British sensation Ed Sheeran rocked-out closing The Philly 4th of July Jam.  Sheeran’s “Sing” was a crowd favorite and his album recently debuted at No. 1 on the Billboard 200. Mind-blowing colors soon illuminated the sky; no Philly 4th of July Jam would be complete without fantastic fireworks.

Keep Up With VH1: