I’ve heard God has a sense of humor. Maybe it’s the universe… or whatever you believe in. Today began like any other. You know, 25 year olds wake-up and scroll their Instagram feeds like it’s the morning paper. Except this time was different, there was a message.  I think back on when I was 17 and moved out, I swore by 25 I’d have my whole life figured out.

I seemed to be heading in the right direction. I had vision; I would go to college and subsequently become somebody. Well the road I took was the road untraveled. See… no one in my family finished high school, so when I left to my university, it was without a roadmap or money. Most of friends from Woodbridge, Virginia had parents who’d been saving their tuition since they were infants. Not me. My mother was a child with a child and she did what she could.

Hell, the fact that we were no longer in the Bronx was a huge suburban accomplishment to my family. So where did I go wrong? Was it when my heart continued to beat for New York City? Maybe it was the fact I could never sit still or stop dancing around. I think it might have been when my stepdad wanted nothing more than for me to, “stop playing that song” and “turn my stereo down”. I quietly clipped VIBE, Latina and any entertainment  magazine I could find to shreds. Tape and images covered my bedroom walls. I was searching, searching for something to feed what was in me. Music. Creativity. Art.

I’ve fallen down with hope in hand many times. I confess, I always lost the battle when I tried to get others to see what I see.  Honestly, I even began to question myself. But mediocrity and betrayal are the same. Mediocrity wraps around young adults minds leaving them easily simulated or pacified. No one is offended when you act “normal”. But I fear it! Life is simplistic  when you decide it’s “okay” to be “realistic”. This is why New York City can eat the dreamers alive.

So at 25, I almost dulled my spark. I realized I became so focused on what I’d sacrificed that I lost sight of what I’ve gained. Small or not, I absolutely do what I came to here to do. No one handed me that right, I fought for it. Maybe the Universe needed  me to not look at what went wrong but see the possibilities again. Maybe a random Quincy Jones quote dropped in my lap so I could continue the fight. Success is not a fairytale and you will lose everything including your mind trying to obtain it. But I will be here writing until my ink runs dry. I’ll be creating what I once hoped to be apart of and enjoying the process. One day the right people will believe too. 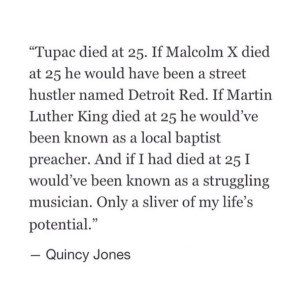