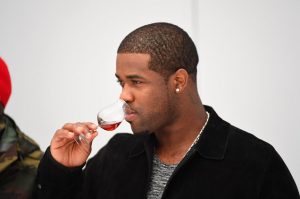 In a new campaign launched by Hennessy, A$AP Ferg reps his beloved Uptown through three passions: art, music, and Cognac. Fans can now experience the rapper’s “Never stop. Never settle” story through a tasty drink, “The Uptown,” and its The Hennessy Uptown Inspired by A$AP Ferg Cocktail Kit.

The first 100 orders (via CocktailCourier.com) will receive a limited-edition vinyl of Ferg’s new track “Family” and a pressed record with the cover art painted by the rapper himself. The Uptown’s campaign video meets the MC in his stomping grounds, with the Hennessy team spotlighting “[the] unique creative process that’s established him as a master behind the mic, as well as in other endeavors, including painting.”

Billboard went behind the canvas with Harlem’s Trap Lord, as the mogul also shared his artistic ambitions, his one-of-one cognac recipe, the influence of family on his career, what the late A$AP Yams taught him, and what upcoming projects fans can expect from him.

How did it feel reconnecting with your paintbrushes and palette for the cover art of your new track, “Family?”

It was good because I do not get a chance to paint as much as I used to. I set some time aside, and I really got into it.  I was [even] begging Hennessy to give me an extra day to paint. We worked it out. I wanted it to be perfect and did my best on it. It looks how I had it in my head. That felt really good.

It was a collaboration between us. I came up with these ideas to make it the best thing you ever had in your life. [Laughs.]

Do you anticipate Hennessy’s “The Uptown” becoming a staple beverage in Harlem?

What is your fondest memory uptown with the A$AP Mob?

Wow! We have so many. One of the most prominent was the [A$AP Rocky] “Peso” video. I feel like it was a defining moment with Rocky and our careers. We shot the whole video on my block. Most recently, the “Plain Jane” video was filmed uptown as well.

My best memory with Yams is our conversations. He and I would be on the phone for hours. We’d just talk about different quirky and unique ideas. For example, one time Yams told me we should have this flower lady come on stage for Valentine’s Day and hand out things to women.

What do you feel A$AP Yams taught you that still rings true today?

Yams taught me to stick to my guns, and be as authentic as I can be. He was never conforming to anything. Yams was one of those people who did not care about mainstream or commercial success. He just wanted to do him. His vision was his vision. And, he made it, so, the A$AP Mob’s vision did not have to conform. Yams taught me how to believe in myself.

Can fans anticipate seeing more of your paintings in the near future?

Yes, I actually want to curate a show soon. I want to show my art, as well as, include friends, and artists I enjoy. I am not sure where it will be at yet, but it is going to be cool. Hennessy will be providing the beverages… of course.

On your campaign’s single, “Family,” you mentioned your mother beating you for acting naughty, and your father being a savage. How has their balance influenced how you’ve moved throughout your career?

They balance my family. [Laughs.] It has definitely influenced me. My father was the coolest guy in the world, before he passed away. He was that guy! Puff [Daddy] was inspired by my pops. My father did the Bad Boy logo. He also did the Uptown Records logo for Andre Harrell. He was mingling with the top guys. He was just the dude that everybody came to for advice. He had a lot of styles, and I learned a lot of that from him.

From my mother, I learned a lot about hard work. She is a beautiful person inside-out. She taught me to be stern. I was able to filter out whatever did not mesh well with me. I am my own person. I saw both and created [from there]. It helps to have a great family base. Whenever I meet a girl or anybody, you can learn a lot from their family. You can be talking a lot or selling a dream, but I will be able to tell who you truly are through your family.

On your Hennessy video launch, you acknowledged having many layers. What is something about you that most people fail to grasp from the surface?

I think a lot more of my artistic side is starting to seep out.  This campaign is helping me spread this message of [me] being creative. I have artistic freedom. There is a deeper side to me.  I want to do a lot more painting. Still, I’m focusing on the music. I want to make really good music. I’d rather be a master of one than a master of none.

How long did it take you and the mixologist to select the rare ingredients of your cocktail?

Well, I knew how I wanted it to taste. I’m into culinary arts. I love to watch Chef’s Table on Netflix. All these different ingredients that go into different recipes can create different exposures and moments in your mind when you are tasting something. And, that is what I came up with. I came up with something spicy. I had something that was sweet. The mixologist was able was able to point out what those things were specifically. We came up with a great concoction.

Tell fans what the mantra “Never stop. Never settle.” means to you personally.

“Never stop. Never settle” goes back to my whole career. You know, it started with the first album, Trap Lord. A lord cannot be trapped. We all have the God in us. We have to rise above it all. That is what always strive, and prosper is.  It is never stop and never settle. It is describing how you keep rising.