Anthony Russo is preparing to break through as the self-proclaimed “millennial Justin Timberlake” in the aftermath of his cross-country opening set on G-Eazy’s The Beautiful & Damned Tour.

Already finding millions of listeners through the independent circuit, the 20-year-old pop newcomer boasts the fundamentals for mainstream stardom. Russo’s songwriting positioned itself on the feel-good bops “2:AM” and “California.” Still, his latest offering on Gerald’s “Rewind” video placed a charismatic face to the breakup anthem’s chorus.

The song’s no-f—s-given approach added edge and newfound legs to the heartthrob’s arsenal. Records “I Jusswon” and “Hurt Myself” knock through with the complexities of young love and sonically showcase the St. Louis native’s urban influences. Keeping momentum, Russo took his talents abroad for the “Can’t Go Wrong” music video, giving his fans an intimate look at love.

Billboard caught the ascending crooner during the release of the vulnerable earworm to discuss what “Can’t Go Wrong” represents, his transition into Hollywood, and lessons G-Eazy taught him on the road.

Your breakthrough single “Ghost Stories” had a Spanish-language introduction. What was its significance?

So the significance with that song, in particular, was just the vibe it laid down for the record. Gosh, it has been so long since I have gone through the translation. I believe it means, “No matter the distance between you and I, no matter how many times the sun circles around the Earth, I will always be missing you. I will always be thinking about you and always love you” — it is that type of track. The introduction lays the foundation [for the song]. Most people probably did not know what it was saying. You can kind of tell what she was saying by the way she sounds.

The feature on G-Eazy’s “Rewind” plays through as a dismissal of jealousy, but the music video takes your partner’s crazy up a notch. How was filming this video?

Oh, it was super fun! Yeah, the direction we wanted to capture was that envy or jealousy that pushes someone over the edge. It played out to the extreme in the music video. The song is [explaining how] someone is annoying me, blowing up my line every night, and how she is getting on my nerves. The video took that concept a step further. It is cool to see how it came to life. 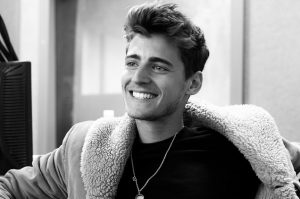 You opened The Beautiful & Damned Tour. In what ways did this cross-country stint enhance your showmanship?

Oh my gosh! Well, I do not know what I learned more from: performing myself or watching Gerald perform. G-Eazy is an incredible performer, no matter what type of music you are doing. I think learning how to engage that size of an audience [was pivotal]. I was coming from playing shows with about 10 to 15 people, and it was really a learning experience. Like, you turn 10 people’s attention, and it starts to multiply quickly. Things can set for the worse or the better. It is a chain reaction.

I learned to get the whole crowd engaged and how to focus on individual people. That was the most significant gift and tool I took away from the tour. Also, watching G-Eazy every night helped me see how he moves the crowd. He makes eye contact with people. Those are two things you have to do as someone on a stage.

You have to carry yourself in a manner where there is a combination of humility but also confidence. You have to know you are up there and why you are up there. Also, I thought, “Yo! I would not be on this stage if it were not for the people in the audience.” So it’s a nice balance to figure out. The tour was great!

You’re originally from St. Louis, but your transition to California has been transformative — so much so, your single “California” garnered more than 10 million streams on Spotify. What does this momentum mean to you as an independent artist?

I think this is a testimony to what you can do with the right team around you. Coming from St. Louis, the music circuit out there is not the most productive yet. I think the city is working on it. There is a reason everyone comes to LA. There is something in the water out here. When everyone comes here, everyone is doing the same thing.

You can find like-minded individuals who help your vision come to life. Fortunately, I was linked to great management. We have a nice crew. Through relationships and connections [my team] has made over the years, we were able to cultivate a really good following. We built up a fanbase and traction. We got the music out there without really needing the help of a label. I think it’s a testament to what you can do with an independent artist these days — considering streaming platforms and the access you have to getting your music out to the public. 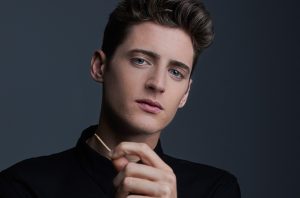 Where do you position yourself within the pop genre? Who do you consider your contemporaries?

I consider myself to be… well, it is interesting. I am sure a lot of artists have a hard time with that question. You never want to compare yourself to anyone. I will tell you who I am a huge, huge fan of. So I am a big fan of John Mayer, although I make music that is entirely different. His influence on my writing has been unbelievable.

He is my goal as far as being a good songwriter. John Mayer has it. He just has it! His music is intimate. It connects to people, and that is why it is amazing. I say sonically, I’m more of a Justin Timberlake.

So you feel you are a millennial Justin Timberlake.

Yeah, I am more of a modern JT. I feel like that [title] makes him seem outdated, and that is not the case. JT will always be a legend, and his music will always be [in the] now. You can listen to his stuff today, and it gets you moving. It has tempo; it has everything that you need for a good time. It is not outdated. I hate to reference this as “modern JT.” So I am more so alluding to what he would be influenced by if he were surrounded by the things that millennials are surrounded by now, and if he were making music at the start of his career [today].

2018 showcased your songwriting on the tracks “Hurt Myself” and “I Jusswon.” Still, the vulnerable song “2:AM” was surrounded by a viral buzz for its lyrics. Do you believe that scenario is common?

Yes, I absolutely do. In fact, I think everyone in their life experiences that by the time they are 13 or 14, you know? Maybe for a seventh-grader, it will not be [up at] 2 a.m. but instead 11 p.m. Everyone has experienced that longing for someone and being absent-minded at the moment they are presently in because they are so focused on what a person might be doing.

It is because you miss that person. Your mind is just elsewhere. That is a natural phenomenon as humans. I think that is what makes the song relatable. It is pretty cut and dry. There is nothing too metaphoric about the track. It is very straightforward. It just hits you.

For clarity, do you believe many people are involved with individuals while they are thinking of someone else?

In particular, this song has one lyric that pertains to being out with someone else yet having your heart in another place. The moral of that story is missing one individual, whether you are out with another girl or another guy. You [can be] out and about, whether that is at your job, or at school, whatever. You cannot do the task in front of you because you are focused on this other person. The song’s story is [based on] missing someone, just missing that one person, [for you]. Some can shake your life up, and you can’t get that person off your mind.

You recently released the “Can’t Go Wrong” visual. Describe your travels with your video love interest in Portugal and Thailand.

So, that was a pretty amazing experience. I was in a rough time with myself when I met her. Yes, she was traveling to Thailand when I was in LA. Something inside me, well, the artist in me said, “love is love.” I love, love. Imagination is kind of where everything stems from as an artist. I was at a point where I felt like going, even though it might have been the craziest thing to do. To me, it was not the smartest thing to do [on paper]. Still, I followed my heart out there.

I met her. She impacted my life unbelievably. That is kind of what the song itself came out of. The video was what we just happened to have as footage. It was not ever intended for the song. It is raw. I am super thankful for her, and that record. It means a lot to me.

Tell your fans about the message behind the tune.

It is explaining how when you meet the right person whatever they say to you feels good. It is a fun song and anthem about when you and someone else connect. The puzzle piece fits. No matter what that person does, you can say what you want, but it can’t go wrong. We just can’t go wrong. You [feel like you] already won. You are past the point of having to appease to me. You did it. Yeah!

What do you need your listeners to know about you?

I need my listeners to know I am a simple dude. I try to make music in an honest and vulnerable way. I am sensitive to a lot of things creatively because of that. As an artist, you have to be. So, I can make the [type of] music that they want to hear.

I am human as everyone else. I experience the highs of life, the lows of life, and I do not necessarily deal with it any differently. No matter how much success I achieve through music or fame, that will never change. I still own permeable skin.

I want my fans or the people beginning to listen to me to know that the person on the other side of the headphones is a lot like them. I hope that that keeps a good relationship between my fans and I. I never want to want to sway from making honest music. You know?