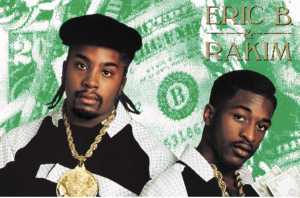 Legendary New York MCs Eric B. & Rakim have returned to their stomping grounds with a flavorful partnership. Universal Music Enterprises’ label imprint and editorial platform Urban Legends and Mikey Likes It Ice Cream launched a contest to honor three decades of records by one of hip-hop’s most influential duos.

So as the pop-culture parlor scoops its organic flavor of the month — appropriately titled Follow the Leader — devotees can enter to win Eric B. & Rakim’s Urban Legends box set. The Complete Collection 1987-1992 exclusive vinyl dates back to Paid in Full and contains the pair’s complete catalog, including their top 10 Billboard Hot 100 hit “Friends.”

The twosome’s 10-disc vinyl/CD set is the first U.S. career expanding box for any hip-hop artist. While Eric B. & Rakim are fresh off their cross-country 2018 Technique Tour, they are eager for what is en route. Billboard chatted over ice cream with Eric B. and Rakim to discuss their top five emcees, what mumble rap means for the culture and paying fans what they owe them.

Check out what the icons have to say about their legacy.

Urban Legends is well-known for their work with the upper echelon of hip-hop. How do you feel now that they are putting this vinyl collection in your name?

Mumble rap is rising, and your lyricism has been trailblazing. How do you feel about its influence within the hip-hop genre?

Rakim: Well, I am just hoping it gets better [musically]. I am hoping that they stop hitting us for our lyrical content. I hope the young artists realize that this is an [important genre]. Just stop. … Make everyone proud to be a listener.

It is young now, but hopefully, it will get to where it was back in the day. In the Bronx, it was the same thing. “I said a hip hop the hippie the hippie/ To the hip hip hop and you don’t stop,” [Rapper’s Delight by Sugarhill Gang] was mumble rap. Ya’ mean? It was young men that matured in New York. Let’s hope it will mature in other states, so we can get back to what we were doing it.

How did it feel to get back on the road?

Eric B.: It felt great. Before we are musicians, we are brothers. So, it is like, you know, if we do not see each other for ten or 15 years, we are still family. We are right back [together] like we were hanging out yesterday.

Why is your flavor better than everyone else’s at Mikey Likes Ice Cream?

Rakim: Word up! It is like flavor in hip-hop. There is flavor in ice cream. No matter what it is, we are going to make sure that the consumer likes what is going on. It is just trying to make good things happen.

When you think of legacy, how do you hope to be revered?

Rakim: Oh, that is very important. I mean we came out in 1986. To be able to put out music, get noticed over thirty years later, and be appreciated is a blessing. So, at this point, legacy is all we got. We just want to make sure we keep our brand, and Eric B. & Rakim alive. Again, it is a blessing to be able to cultivate a legacy.

What is your fondest studio session?

Eric B.: Ah, we got a bunch of them, man. I tell this story all the time. In my safe deposit box, I have a book. The book sat in the studio for a while. I said, “Yo, Rakim! I [have your] book.” He wrote the lyrics to, “I Know You Got Soul” in it. I said, “Rakim, here is the book.” He told me, “That shit ain’t gon’ be worth nothin’.” [Laughs] But, nah! [I told him,] “I am keeping this shit. It is going to be worth something someday.” Now thirty-one years later, I still have the book, where he wrote.

So that is never going to be on eBay or any other website, right?

Eric B.: [Laughs] No, no, no! We are going to pass it around to each other’s living rooms. It will be placed on the cocktail table or something. It is something great to talk about.

Since you are a duo, can you name your top five pair’s in hip-hop?

Eric B.: Slick Rick and Doug E Fresh, and you have to say EPMD, they are from around the way.

Rakim: Wow, we are getting short with the duos. Salt-N-Pepa!

There was nobody from the 2000s — is there a reason for that?

Rakim: The people we mentioned have good track records. You know what I mean? Some of the younger artists may be able to have that same impact on music; then we will be able to put their name in the mix. We have to go with history.

So, who are your top five MCs in hip-hop, overall?

Rakim: Oh, aight! Well, you got Rakim. [Laughs] You have Rakim, too.

Eric B.: And, then you have Rakim there.

Rakim: He comes in at a strong third.

Eric B.: Then there are two other guys named Rakim.

Rakim: Yeah, yeah! That is about it! [Laughs]

Eric B.: The fifth name was Rakim. Boom! [Laughs]

What is to come from Eric B. & Rakim?

Rakim: We are just trying to stay relevant. We are on the road, paying our fans back what we owe them. Hopefully, some good music should come out of it. As I said, we [are] keeping the legacy alive.