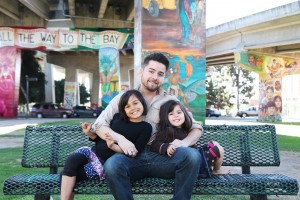 YouTube sensation Jorge Narvaez is a young, single-father of two. Originally from Guadalajara, Mexico, Narvaez grew up in San Diego, California, where he began documenting his family’s interactive lifestyle. 176 million views later, the RealityChangers channel continues to inspire people throughout the world, with their candid spotlight on family, community, art and music.

Narvaez popularity exploded when he and his daughter, Alexa, tackled the issue of immigration through song. Their family was heartbroken in 2007. His mother, Esther Alvarez, received a rejected application; after her husband submitted a petition for her residency. Narvaez’s mother arrived to the United States 20 years prior. She was optimistic about providing a safer environment and promising future for her family. Her painful separation in Mexico is a familiarity for many Hispanic families in America.

Singing Edward Sharpe & The Magnetic Zeros’ “Home,” Alexa and Narvaez stole the hearts of millions, in addition to, gaining the empathy of prominent tastemaker. Ellen Degeneres, Ryan Seacrest, national and international news outlets have shared Narvaez’s rendition of “Home.” Their personal experiences stimulated change and reminded numerous onlookers they were not alone.

According to U.S. Census Bureau population estimates, there are approximately 54 million Hispanics, and the majority is those of Mexican descent. Narvaez’s brother, Eric, is a wounded warrior. He was shot and medically discharged from the U.S. Army, following his first tour in Afghanistan. Eric shared his distressing story with President Obama. Alvarez signed her sons’ papers at 17-years-old and granted him permission to enlist. Mr. President graciously thanked Eric for his service to the country but no immediate solution is available. A temporary freeze was placed on the executive action President Obama put forth, by a federal district judge.

His mother raised accomplished American children, yet lives with the potential threat of the deportation.  Jorge Narvaez being an honors graduate from the University of California San Diego and a founder of the Reality Changers Foundation proves himself as a stellar figure in his community. The Reality Changers foundation offers inner-city scholars the academic, monetary and emotional resources to attend college.

Through all his obstacles, Narvaez is steadfast with his cheerful, uplifting character. The love displayed on the RealityChangers vlogs is tremendous. His passion for adding culture to his daughters’ lives is beyond noteworthy. He is not only a positive role model for Hispanics but for communal leaders everywhere.