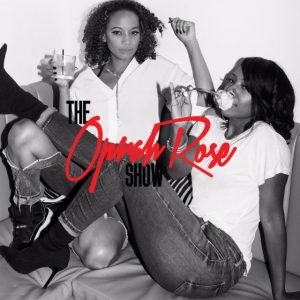 The Oprah Rose feminist podcasters Tiara and Gena became a viral success with the vivacious mantra, “The juxtaposition between being a spiritual and sexually liberated woman is that at some point you’re gonna end up on both knees.” And somewhere along filterless streams about scandals, religion and everything in between — they and their #HoesBeLike Snapchat selfies, continually boast collaborative discussions with pop culture greats. The unlikely recent offender was the Heart Healer, himself, Rob Hill Sr.

VIBE received a front row seat at The Oprah Rose Show’s first-ever live taping in New York City. Here are seven envelope-pushing moments from the trio’s dialogue. You can also stream the podcast on iTunes now.

1. The Oprah Show: Where was the most unusual place you’ve had sex?

Rob Hill Sr: In a family restroom in the mall. [Laughs] I was nineteen.

2. The Oprah Rose Show: Name a moment where you felt powerless?

Rob Hill Sr: Between 2014 and 2016, I was battling for my son. If anybody is familiar with family court, it is kind of [restricting]. That was one of the last time’s I ever felt powerless. I [feared] I had no control over what was going to happen to me and my son’s relationship. I literally left the courtroom choking one day. Thankfully… that worked out to my benefit. I walk my son to school every day.

3. The Oprah Rose Show: What was your worst/best sexual experience?

Rob Hill Sr: I am one of those dudes that don’t talk. I am not about to tell anyone.

Rob Hill Sr: There was a smell [once]. That was worst. [I ended up having] something else to do that night. [Laughs] I try to have more good sex than bad sex.

The Oprah Show: The cop-out is the girl I am in love with.

4. The Oprah Show: What is something that you are grateful for today?

5. The Oprah Show: Ciara caught flack for telling women to “level up.” What is the difference [between] walking in the spirit of a girlfriend and a wife?

Rob Hill Sr: If you are asking how to be a wife, I don’t know. [Laughs] That is probably something I am still trying to figure out. However, when you talk about being a wife, or a husband, my understanding of relationships fundamentally has been, this is not somebody you fill the spot [with for a title]. There is a difference between me having a wife and my wife. There is a difference between you having some guy as your husband and the guy that was meant to walk beside you. I try not to make it some happily ever after, forever in love, [or] perfect type of thing. When I think of marriage, I think of it in a very personal context.

6. The Oprah Show: So, you have been married before, [right]?

Rob Hill Sr: I have been in a relationship that planned to head towards in marriage before.

The Oprah Show: So, you have never been married [before]?

The Oprah Show: It is just paperwork. So, no final signatures [on the marriage certificate you signed]?

Rob Hill Sr: No. We don’t have to act like a lot of people haven’t been talking about it, [or] assume the situation. Now granted, I haven’t been eager to clear anything up. I am not that type of guy. In order to talk about a breakup, we’d have to talk about a lot of things that could be considered intimate. As a man, I don’t feel like I owe anybody that.

7. The Oprah Show: How do you feel about first date etiquette and sleeping with someone on the first date?

Rob Hill Sr: As far as paying for the date, I think the man should take care of it. If you decide to sleep together, it is perfectly fine. I don’t have rules for engagement in that sense, just make sure it is consensual. I’ve been in a relationship with a woman I slept with on the first date. We lasted nine months.

By Bianca Alysse Mercado for VIBE