How do we fix the divided states of America? We come together in protest and under no circumstances grant a bully consent to silence our voices.

November 9, 2016 left people of all races, immigration statuses, sexual orientations, genders and abilities feeling unprotected. So in New York City, and other areas around the country, anti-Trump totalitarianism marches took place. I gathered what was left of my shattered spirit and walked in protest, too.

“This was a white lash against a changing country,” CNN political commentator Van Jones calmly stated after news became clear that Donald Trump had won the 2016 presidential election. Tears streamed down my face as I watched my television, heartbroken and in disbelief. Our community is now threatened at what feels to be a “Hunger Games” level. A real estate mogul-reality TV persona, who openly positions himself as a misogynistic, xenophobic, homophobic, Islamophobic, sexual predator, was elected as our country’s 45th President.

Hillary Clinton, a resilient politician and former secretary of state, won America’s popular vote but did not win the Electoral College. Well, Electoral College, in the words of Donald Trump, “You’re fired.”

Reparations never came in generations past, and like the eras before us, white supremacy penalized Black and brown people for their advancement. Also, your next president was endorsed by the Ku Klux Klan.

It is beneficial for Trump to overlook the truths that hurt his position. His disdain for investigative journalism is as prominent as his crooked toupee and policies. Look how he dismissed respected journalist Jorge Ramos in a press conference, retorting “Go back to Univision.” Translation: “Go back to Mexico.” Recently, one of his right-wing devotees was photographed at a Minnesota rally in a shirt that read, “Rope. Tree. Journalist. Some Assembly Required.”

Latinos are the second-largest demographic in this nation. My beautiful Latinidad, you are far more valuable than you’re credited for. We are not going back to any country because this one is ours.

Even though Trump believes that protesting is “very unfair,” it’s a constitutional right. With that in mind, I stand with the people of New York City marching in protest. I spoke with some millennial protestors who were petrified of a Trump presidency. This is what they shared with me. Stay awake and be safe. 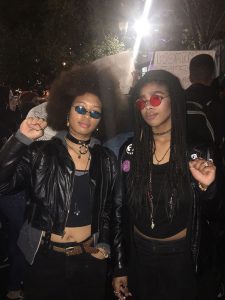 “We are here because we are outraged. A racist man has been spewing so many hateful words his entire campaign. He enticed the country to bring prejudice to light. Discrimination was here, but Trump got the fire going like never before. Maybe this needed to happen so that we can address it. I never imagined a bigoted businessman would become ruler of the free nation. We are one of the most powerful in the world.”

“I am here today because both of my parents are veterans. I am here today because my mother is a part of a nurses union. We are a family of immigrants, two generations deep. I don’t understand this magnitude of hatred in our society when I know we can work together. I just feel there are better decisions that could have been made. We should all start listening to each other before we all suffer the consequences.” 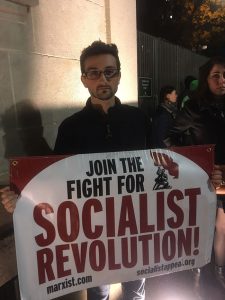 “It’s a shame someone like Donald Trump has been elected. He is a perfect representation of a capital system in crisis. It’s obvious to everyone marching that there is something wrong with the political system, and all the social relations behind it. I’m from a group called The Marxist, and we are organized all over the world with working-class people and oppressed masses to try and bring them to power. I’m here because this is just the beginning of the wave of opposition the Trump administration is going to create. The capital system is in crisis, and completely incapable of bringing humanity forward. The only solution is to overthrow it.”