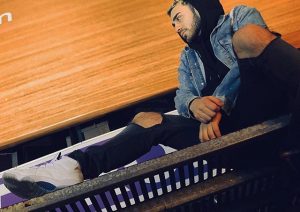 Manny Acosta is a singer-songwriter turned recording entrepreneur with two decades of musical inspiration stemming from the most unlikely of places, an incarcerated father. Raising children in public housing on the mainland presented language barriers and a fair share of obstacles for his island-born Puerto Rican parents. Fleetly, Manny Acosta utilized feel-good musical expression to escape the harsh conditions of his Brooklyn community, as he uneasily witnessed his parents’ struggle to make ends meet.

His father, a working-class man, secured just enough to feed his wife and four children, but succumbed to the pressures of monopolized holiday cheer. Enthralled on Christmas Eve, the Acosta children patiently waited for Santa Claus’ gift-filled arrival. They were instead greeted by the screams of their mother, grieving over her telephone line. The soon-to-be singer’s father was arrested that night for attempted robbery. And, Manny Acosta’s tuneful relief transitioned from serving as his favorite pastime to a means of survival.

Subsequently, instrumentation became the family tradition. Manny Acosta began offering his best renditions of then-radio hits, such as Jon Secada’s “Just Another Day,” and George Michael’s “Careless Whisper,” to lift his mother’s spirits. In unison, his siblings would dance backup on their family tabletop, as the charismatic youngster belted his heart out into a broomstick. Still, this new financial disposition inspired Manny Acosta to become the man of the house. Unbeknownst to his mother, he began skipping school to perform in different Manhattan hotels to supplement the family income.

The crooner went from being a frequent offender at the truancy precinct to being discovered by Prince Charles Eweka and his colleagues. The business moguls’ forthcoming venture kicked off a search to create a Latin boy band. Manny Acosta and other teenage hopefuls auditioned at the Waldorf Astoria hotel. He was spotlighted, at fourteen years old, as the youngest group member and lead singer. Now under the pressure of an LP deadline, the fresh-faced bandmates were whisked away in a luxurious limousine to begin recording sessions in Boston.

Without prior consent, Manny Acosta contacted his worrisome mother with the news of his studio ambitions and reached out to his imprisoned father, requesting his blessing, too. In time, the buzz of the vocalists’ songs took their dreams to mainstream radio and abroad. The group became acclaimed overseas, erecting a new home in Stockholm, Sweden, to complete their debut album.

Still, Manny Acosta had grander aspirations. Intrigued by the concealed power behind the scenes of the public eye, he stepped away from the troupe and positioned himself to become an owner. With his new earnings, he founded his A-list, Times Square sanctum, Penthouse Recording Studios. Today, he has collaborated with conglomerates such as Sony Music Entertainment, FOX Broadcasting Company, Universal Music Group, TIDAL, Warner Music Group, and more.

Inspired by the blueprint of the icon, P. Diddy, and the adornment of his children, Manny Acosta continues to create musical landscapes for both himself and Top-40 hitmakers. The magic of Penthouse Recording Studios has reached the masses through clients DJ Khaled, G-Eazy, Ty Dolla Sign, Busta Rhymes, Desiigner, Akon, Jessie J, and beyond. Today he is posturing himself to become a household mainstay with his returning bilingual cross-genre solo EP, alongside Billboard charted producers, Costi Ioniță, KQuick, and Trakformaz–from his self-made home base.

This rags to global riches adventure will surely back his manifestations of amplifying listeners’ intimate moments, being splashed across newsstands and Hollywood silver screens. Manny Acosta’s resilience is a testament to the top-charted likeness of the past. Through five forthcoming autobiographical EP tracks, this heartthrob is bound to make dance and swoon.