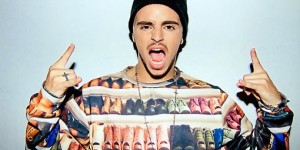 Yanis Marshall is there to create change and reinvent his art. His characteristic is to be one of the few men in France to dance and offer dance classes in heels, both for girls and boys. And when he is asked  Why the heels?   He replies simply,  ” Why not?” More than that, the heels are his favorite accessory in dance. It is also a way to show us that he fully accepts himself and does not impose any limit to his creativity. Like his idol, the sultry Madonna, he likes to challenge the established codes.

Known to have a strong and outspoken personality, he is a young man full of ambition, one that leads his career by taking his own decisions.

We will quickly understand how he is today, one of the youngest choreographers and dance teachers from Paris!

Yanis Marshall is a choreographer, teacher and dancer. Originally from Vallauris, near Cannes, he began dancing at an early age with his mother Nadia who is not only a dance teacher but director of a dance association. While she introduced young Yanis to many different Arts and Sports, the obviousness of his skills as a dancer pushed him to go further on this path.

At age eleven, he passed the auditions for the Dance school Rosella Hightower  in Cannes. This multidisciplinary  Sports-Etudes  training (Ballet, Contemporary, Jazz techniques…) allowed him to acquire a solid technique base and to stimulate his artistic sensibility.

On his release in 2005, he will choose to come to Paris to satisfy his desire for independence and persevere in his chosen field, Dance.

A few months later, in the final year of his training at the Centre International de Danse Jazz Rick Odums, and to everyone’s amazement he obtained his Jazz EAT (Technical Ability Examination) with honors by the age of 15.

He made his first appearance as a dancer in the TV show  Sous le Soleil. There he met Kamel Ouali which offered Yanis a place in the dance troupe he leads in the musical  Le Roi Soleil, produced by Dove Attia and Albert Cohen. For over two years, Yanis Marshall accompanied and danced alongside singers of this great successful show. Thanks to this great opportunity he got to travel across France with a final round of shows at The Palais Omnisports de Paris- Bercy. Yanis Marshall was then only 16 years. He was the youngest of the troupe.

Yanis Marshall continued his career as a professional dancer, still with Kamel Ouali, integrating the cast of the musical  Les Dix Commandements  where he participated in the world tour of the show which led him up to Seoul, South Korea.

Always alongside Kamel Ouali, he went dancing in Algeria to celebrate the 40th anniversary of Independence of Algeria.

He found himself surrounded by the biggest celebrities such as Isabelle Adjani, Youssou N’Dour, Dominique Magloire or Cesaria Evora. It was a homecoming for this French Anglo-Algerian boy.

In 2009, Yanis who has just turned 20 decided to move to New York City. There he met and fell in love with Sheryl Murakami (Emmy Award-winner, choreographer of Beyonce, Lady Gaga,…) at the Broadway Dance Center – Manhattan. He then discovered the Street Jazz dance.

After a year in NYC, he returned to Paris filled with more passion and a desire for success stronger than ever, but above all, with a great additional technical background : Street Jazz style! Yanis came back with the ambition to develop this style in France.

In the beginning of September 2010 he started to teach in Paris at Studio Harmonic, flagship dance studio in the capital where the greatest, such as Redha taught.

With only four students and two classes per week at first, he didn’t give up. Instead, his motivation and determination made him quickly spotted by other dance professionals who invited him to give master classes throughout France. He now fulfills gyms and even gave courses to 300 trainees at the same time.

Yanis Marshall who emphases more the feeling of movement than the form and pure technique, demonstrates great professionalism and great ability to adapt to audiences of different levels, from the youngest to the oldest, from amateurs to professionals. With his renowned training and his many enriching experiences, he now teaches Street Jazz, Lyrical Jazz, and New Cabaret in heels at Studio Harmonic. More than a dance teacher, let’s not forget his choreographic skills.

Yanis Marshall works for various events, both for private parties, clubbing shows but also for Cruise ships or for the inaugurations of luxurious hotels in Morocco (Malika Zaidi, manager of the International Society Show) as well. He was even asked to be a jury member for the International Festival Expectations Of Europe in Sochi Russia.

Today, Yanis Marshall tries new experiences. Recently seen as a candidate on M6 in the show  La Meilleure Danse. He defends his own choreographies and his colorful world … all in heels!