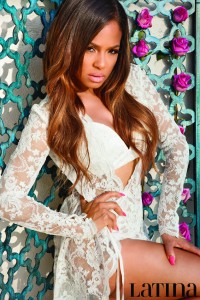 Take a behind-the-scenes look at Christina Milian‘s May 2015 Latina, officially on newsstands, Nook and Kindle Fire.

It was quite the family affair at Milian’s cover shoot. The 33-year-old Cuban American star opens up about working with her mom (Carmen Milian) and sister (Danielle Milian), being there for each other, and more.

Watch it all above!