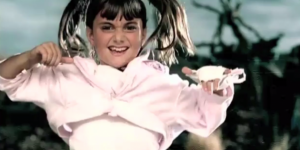 Remember the cute little girl with the pig-tails from Missy Elliott’s “Work It” Video? Well, looks like Alyson Stoner is all grown up and still dancing to the beat of Missy’s tambourine.

Ever since Missy stole the halftime show next to Katy Perry at this year’s Super Bowl, Stoner’s name has been tossed back in the twittersphere. Everyone is reminiscing and wondering, “Where is the little girl from the music video?” In a recent interview with BuzzFeed, Alyson premiered a tribute video she made, recreating her old dance moves with the help of the original dancers from the videos.

“When Missy comes on the radio or in public, I immediately pause, feel so sentimental, and start replaying memories in my head,” she said.

Now a decade later, and Alyson is on the road to building herself as an artist and working on her debut project. Maybe a possible reunion in the works?

“I have new music with an urban/pop flare that she would tear up. Missy, let’s start a new wave of music!”