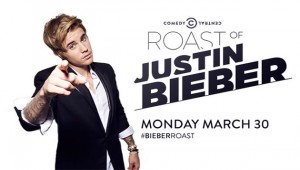 The joke’s on Justin Bieber.

Everything haters have wanted to tell the scandal-ridden pop star was finally uttered during Monday night’s Comedy Central roast of the 21-year-old Canadian – and then some.

Whether it was his rocky on-and-off romance with Selena Gomez or his numerous run-ins with the law, Bieber egged on comedians, including host Kevin Hart, as they took turns skewering him onstage.

The tattooed troublemaker took the humorously inappropriate jabs in good spirit, even using the moment as a turning point in his attempt to shed his bad-boy image and reinvent himself for the better.

“The things that I’ve done really don’t define who I am. I’m a kind-hearted person who loves people, and through it all, I lost some of my best qualities. For that, I’m sorry,” he said during the event, taped two weeks prior. “What I can say is I’m looking forward to being someone who you guys can look at and be proud of.”

Until that day comes, here’s a look at the best jokes from Comedy Central’s roast:

“Ebola patients hear about ‘Bieber fever’ and say, ‘I’m gonna go ahead and ride this one out.’”

“Is it true you dumped (Selena Gomez) because she grew a mustache before you?”

“The Brazilian prostitute that claimed she was with Justin told the news that he was well-endowed. And that prostitute would know because so was he.”

“You have it all … Except love, friends, good parents, and a Grammy.”

“Justin, Selena Gomez had to f–k you. She is literally the least lucky Selena in all of entertainment history.”

“They say that you roast the ones you love, but I don’t like you at all, man. I’m just here because it’s a real good opportunity for me.”

“This kid has spunk, moxie, and a few other STDs.”

“Justin, as a father of six you have to straighten up, son. Last year, you were ranked the fifth most hated person of all time. Kim Jong-Un didn’t rank that low. And he uses your music to torture people.”

“You bought a monkey! I mean, that monkey was more embarrassed than the one that started the AIDS epidemic.”

“Justin, I’m sure it’s great to have 60 million followers on Twitter, but the only place people will be following you in jail is into the shower.”