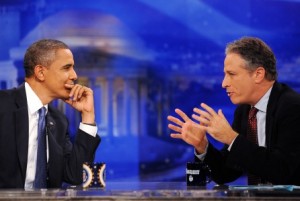 President Obama will make his third and final visit as POTUS to The Daily Showwith Jon Stewart on Tuesday, July 21 leading up to Jon’s last show as host on Thursday, August 6. Reporters Who Cover The White House are forecasting Obama will use the opportunity to pitch his nuclear deal with Iran to millennials.

You know, like how, in making his third and final visit at POTUS to say so-long to David Letterman, back in May, Obama pitched his plan to play dominoes with Dave.

An Obama visit has become one of the stations of the cross for bowing out late-night hosts. “We’ve grown up with you, this country. And after … coming home from work, knowing you’ve been there to give us a little bit of joy, a little bit of laughter. It has meant so much,” Obama told Letterman, for instance, in that aforementioned so-long stop on CBS’s Late Show. “You’ve given us a great gift, and we love you,” Obama added.

Obama also suggested that when they were both finished with their current gigs they “play some dominoes together – go to the local Starbuck and swap stories.”

“I plan to teach law at Columbia,” Letterman responded.

“I’d be interested in sitting in on that class,” Obama snarked, adding,  “That would be a hoot.”