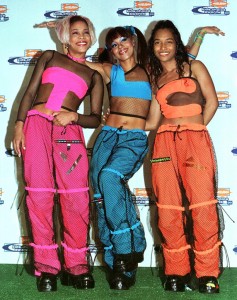 Thank you to everyone for supporting us in these first weeks after announcing our final album. So many of you have stepped forward to share your warm memories of TLC, your support and your enthusiasm for this milestone in TLC history, and for that, we thank you.

As we listen and read the support of our fellow artists, our musical family, we see that something is happening in music, a world we all love so much. Were we given the opportunity to travel back in time, we would start laying the foundation for this change much earlier on for we believe that nothing but good can come of what’s happening.

We are at a place in time when fellow artists can raise one another up and sponsor one another into an age of creative freedom. And in the future ahead, what we have to look forward to, as a community, is a new wave of creative expression.

Now, this is not a unique idea, no. We have seen fruitful partnerships and mentorships in music for generations; examples of artists taking chances for fellow artists in order to watch them grow.

Let’s take a step back and remember Motown, that honest and catchy time that still continues to raise us all. Motown’s greatest gift to the music community was Smokey Robinson, a man who made us all free to dance and sing like never before. What we must remember about Smokey is that he took it upon himself to channel his creative energy into the success of his fellow artists like The Supremes, The Temptations, Marvin Gaye and Stevie Wonder.

And who could forget the example set by Paul McCartney and the Beatles. For two long years, Paul and the Beatles honed their skills in the clubs of Hamburg, West Germany. Often playing for hours and hours straight in a foreign country. Like the days of the Renaissance, the hard work they put in changed the cultural and aesthetic life of men and women for the better. The music they created continues to inspire thousands of artists, across genres, around the world. They are a key reference point — an influence that pop artists around the globe have in common.

We all must admit that Michael Jackson changed everything. As the first black superstar on MTV, Michael was an example for any young black person who ever thought, “I’m gonna be a star.” And then there was Michael’s incredible collaboration with Lionel Richie, Tina Turner, Stevie Wonder, Bette Midler, Bruce Springsteen Diana Ross, and dozens of other legendary musicians on “We Are The World,” the charity single that raised millions of dollars for Africa. “We Are The World” was powerful and inspirational, in part because it was a selfless collaboration between artists who were doing just fine on their own. Make no mistake, it proved that amazing things happen when artists collaborate.

Now Prince, he knows what we are talking about. Prince’s success speaks for itself. Ten platinum albums. Thirty Top 40 singles. 7 Grammy awards. But Prince knew full well that no one gets to the top without a helping hand. He was generous with his success, and staked his reputation in artists he believed in. He promoted and supported artists like Vanity 6, Sheila E, the Time, and a multitude of others. With this, His Royal Badness set an example for us all.

Of course, we will never forget what M.C Hammer has done for the music community and for us personally. This man is a machine on the stage as well as an angel at heart. He has given so many dancers a chance to live out their dream. Taking the time to mentor anyone who’d listen, including us, TLC. We will always be so grateful for everything he has done.

In the 1990’s and early 2000’s we saw Missy Elliot leading by example, showing the music community that we must invest in one another with the education we can provide and the knowledge we’ve served to gain. Missy has done an amazing job of mentoring young artists. Aayliah, Tweet, Monica, Mya and Jennifer Hudson are just a few greats that she championed, that she supported.

Just look at someone like Mark Ronson. Mark reached number 1 on the billboard charts this month with “Uptown Funk,” a bumping song featuring Bruno Mars that combines the best of the new with the best of the old. Mark understands what makes music timeless. He’s collaborated with artists as diverse as Bruno Mars, Ghostface, Jack White, and Duran Duran. No matter who he’s working with, Mark clearly understands the beauty of collaboration. He understands the beauty of one artist supporting another.

And recently: Pharrell, you blow us away with the model you provide for the music community. Your work with Frank Ocean, with Kendrick Lamar and so many others makes you look like a young Smokey Robinson. You’re reminding us of the joy that singing and dancing brings. You’re reminding us that this joy is shared by all of us.

These individuals have led us to this point where we are now. These artists have shown us how to nurture each other and protect the integrity of music.

Yes, our last album came out a while ago, but thousands of people raised their voices telling us to come back, that we are not done making music. We both said, “God, allow us to continue making music and we will be happy.” And now we realize that this final album is much more than we originally imagined. We are inspired by our fans to make more work, always. And after the showing of support we’ve seen, we are inspired by our fellow artists to lead and make a path.