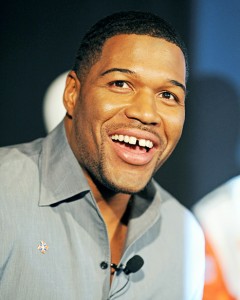 Michael Anthony Strahan (born November 21, 1971) is a retired American football defensive endwho spent his entire 15-year career with the New York Giants of the National Football League (NFL). Strahan set a record for the most sacks in a season in 2001, and won a Super Bowl in his final season in 2007. After retiring from the NFL, Strahan became a media personality. He is currently a football analyst on Fox NFL Sunday and he also serves as co-host on the television morning talk show Live! with Kelly and Michael alongside Kelly Ripa. He starred in and produced the short-lived Fox sitcom Brothers and appeared as host forPros vs. Joes alongside fellow Fox football analyst Jay Glazer. On February 1, 2014, he was elected to the Pro Football Hall of Fame.