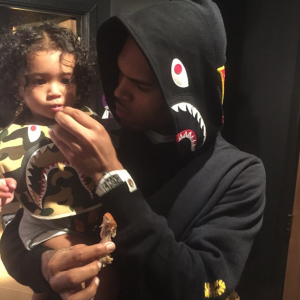 There’s nothing like a father’s love — just ask Chris Brown.

The singer, 26, made his affection for daughter Royalty known by including the 16-month-old on the cover of his new album, which shares the little girl’s moniker.

In the cover photo, which Brown debuted on Instagram Friday, the shirtless rapper is seen holding his baby girl close to his chest.

Royalty is Brown’s daughter with Nia Guzman. In September, the rapper wasgranted joint-custody of the tiny tot after a dramatic custody battle.

The court decided that Royalty will use Brown’s last name and split her time between her mother and father. Brown will spend 12 days per month with the girl, and will have to pay $2,500 a month in child support along with covering Royalty’s schooling, health insurance, medical bills and nannies, TMZ initially reported.