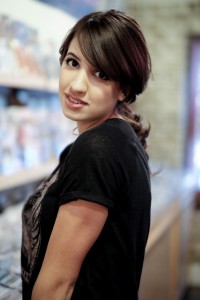 Bio: Victoria Canal is an Atlanta-based talented 17-year-old singer/songwriter and multi-instrumentalist known for intimacy and poignancy in her performances, packing intelligent lyrics and a soulful delivery into her powerful message.

She has been passionate about music since her grandmother, a piano teacher and organist, first introduced her to the piano at an early age. Victoria discovered her passion for songwriting at the age of eleven, penning compositions and lyrics with a sophistication far beyond her years.

That passion led her to seek out any opportunity she could to perform, and she has had the privilege to since then receive two full scholarships for the Berklee School of Music Five-Week performance programs in 2013 and 2014 and to be chosen as one of 6 singer-songwriters to become a Young Arts National Finalist in 2015. Victoria has also performed in such iconic venues as the Apollo Theater in New York City, the Troxy in London, the Berklee Performance Center in Boston, Cafe 939 in Boston, and more. In 2014, she was the winner of the Eddie’s Attic Bi-Annual Singer/Songwriter Shootout in Atlanta. In 2015, she raised thousands of dollars worth of meals through SERVinternational with her popularly recognized Open Mic Tour through the east coast.

Currently, Victoria is finishing up recording an EP in Atlanta, of which two singles have already been quietly released to the public – Little Girl, a gut-wrenching anthem addressing human trafficking, and Unclear, a pop track with hit potential for its playfulness and relevance to teen life. Along with touring, writing, and finishing up her senior year of online high-school, Victoria is working passionately every day towards making her dream of having a life-long music career a reality. – Via Facebook