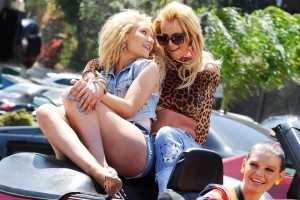 The Queen of Pop returns ageless as ever, alongside the new blondie running things, Iggy Azalea. Together they shake-up in their retro leopard, acid denim, crimped hair and colorful plastic accessories. There’s money flying all around Spears but what’s new? Their blast from the past like video fast-forwards towards cell phones that don’t weigh 10 pounds and wiping “the floor with boys.” Azalea makes for shapely eye candy, as Spears still masters her 8-counts. Watch the video above.