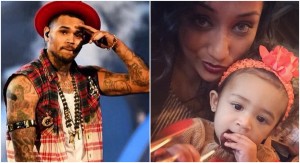 Chris Brown wants to raise his 9-month-old daughter Royalty away from public light.

According to Hollywood Life, the 25-year-old R&B singer, who allegedly has a nine-month-old baby girl named Royalty with long time friend and former model Nia Amey, wants to give the toddler a normal childhood.

“No disrespect to Kim or Kanye, Chris thinks they’re both talented and successful people at their respective craft. But as parents… he wouldn’t do half of the s**t they do,” a source said.

“Parading Royalty around and taking her to places she doesn’t have business being for the sole sake of having her photograph taken is not something Chris will be doing. That’s absolutely crazy to him and he doesn’t understand why anyone would use their child like that… for fame and publicity,” the insider added.

It was previously reported that Bruce Jenner is upset that Kim Kardashian, 34, is treating North West like an “accessory”.

The Keeping Up With The Kardashians star previously received backlash on social media with people branding her a “bad mother” after dressing North in a see-through Givenchy outfit during the Paris Fashion Week.

Recently, North threw tantrums twice during the New York Fashion Week. The tiny tot burst into tears during her father Kanye’s show with Adidas and the toddler also cried at the Alexander Wang runway show.

“Chris already knows how vicious the business is and he wants to keep his daughter as far away from it as possible,” the source went on.

“The last thing he wants is for his girl to grow up around a bunch of fake people who cater to her like she’s one of the Obama girls,” the insider said. “Chris didn’t grow up like that and while he’s going to give Royalty ever advantage possible, he wants her to know that she’s not entitled to anything and that she will have to work in life.”