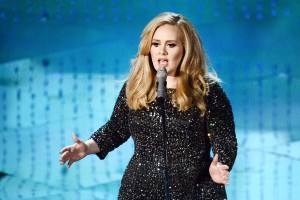 Adele may have just set fire to the Internet!

Fans watching commercials during The X Factor U.K. Sunday night received quite the surprise when a 30-second ad appeared on the small screen that sounded like a special tease of Adele’s newest song.

In a matter of seconds, the British singer was heard delivering a soulful delivery of an unnamed track.

To twist things up, the only image seen on the black screen was a few lyrics as viewers listened to a piano and voice resembling the Grammy winner.

“Hello, it’s me / I was wondering if after all these years you’d like to meet to go over everything,” she sang. “They say that time’s supposed to heal you / But I ain’t done much healing.”

We know, it’s such a good tease! And unfortunately, Adele’s rep had no comment about the commercial.

While the suspense continues for fresh, new music from the “Rolling in the Deep” crooner, fans are hoping a new album will be released next month.

According to Billboard, the notoriously private singer’s record label, XL Recordings, plans to share her third album sometime in November. Adele’s last album was released in 2011 and ultimately earned her six Grammy awards including Album of the Year.

Until the new tracks drop, may we interest you in Sia‘s new single called “Alive!” It may not feature Adele’s voice, but at least she wrote it. Baby steps, fans!   – Via E Online