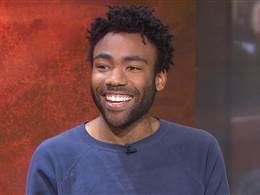 This morning Donald Glover stopped by The Today Show to promote his upcoming movie The Lazarus Effect and while he was there the topic of his music career came up, of course. Glover admitted that he may soon stop rapping as Childish Gambino.

He said that, “Childish Gambino is like a period of my art time” and that he wants to have multiple periods within his life. “I feel like Childish Gambino is a period that should come to a close,” Glover said. “I like endings.” However, phrasing is everything and because of that it is not clear if he will stop making music entirely or just under his Childish Gambino alias.

Watch the interview above.

-Via Pigeons And Planes