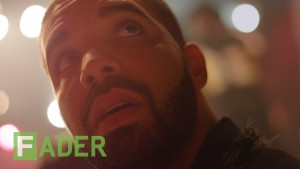 Drake is a superstar—the only guy who could dethrone Taylor Swift on the charts with a mixtape. In a rare interview, he spoke with The FADER.

Coming up in Toronto, people told Drake to move to New York if he was serious about making it. Instead, he stayed where he was and made history by proving that if you’re a truly multi-layered artist, you can make it from anywhere. “Do it the way I did it,” he says in the above Obey Your Thirst documentary. “Do it from where you’re at. If you have the music, that’s all it takes.”

Now, at the top of his game, Drake says he competes not with established legends or other top-sellers, but with the countless kids itching to take his spot.

Now that hip-hop’s playing field is more open than ever before, Drake knows
there are countless kids itching to take his spot. Those up-and-comers are now his competition, not any established rapper. “That’s how I try to keep pushing this forward,” he says. “Just to let that kid know that I’m not done yet.” Watch the full documentary above, and stay tuned for three more by Sprite and The FADER, sharing the stories of Nas, Vince Staples, and Isaiah Rashad.
http://www.thefader.com/2015/06/24/dr…