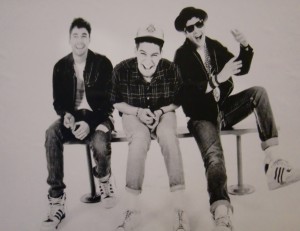 Originally formed as a four-piece hardcore punk band, The Young Aborigines, in 1981 by Diamond (vocals), John Berry (guitar), Yauch (bass) and Kate Schellenbach (drums), the band appeared on the compilation cassette New York Thrash, before recording their first EP, Polly Wog Stew, in 1982. Berry left shortly thereafter, and was replaced by Horovitz. After achieving moderate local success with the 1983 experimental hip hop 12-inch “Cooky Puss”, Schellenbach dropped out and the group made a full transition to hip hop, releasing a string of successful singles. The Beastie Boys toured with Madonna in 1985 and a year later released their debut album Licensed to Ill. The group sold 22 million albums in the United States and 40 million albums worldwide, making them, according to Billboard, “the biggest-selling rap group” since 1991.

With seven platinum or better albums from 1986–2004,  the Beastie Boys were one of the longest-lived hip hop acts worldwide. In 2009, the group released digitally remastered deluxe editions of their albums Paul’s Boutique, Check Your Head,  Ill Communication and Hello Nasty. Their eighth studio album, Hot Sauce Committee Part Two, was released in 2011,and received positive reviews. They were inducted into the Rock and Roll Hall of Famein April 2012, “just the third rap group to enter the Hall, after Run-D.M.C. (2009) and Grandmaster Flash and the Furious Five (2007).”  The following month, MCA died of cancer of the parotid salivary gland.In June 2014, Mike D stated that the Beastie Boys would not continue their careers as a group, as a promise to Adam Yauch.