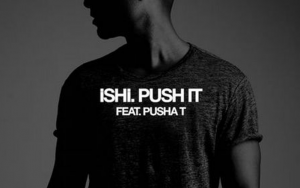 Stockholm-based producer Ishi released “Push It,” his appropriately titled collaboration with Pusha T a few weeks ago, and now follows that up with a video for the song. The cosmic clip is an assault of burning roses, menacing wolves, ballerinas, and Pusha reigning supreme over the entire cosmic kingdom, bringing One Thousand And One Arabian Nightsto life by rapping about a snake charmer. Actually, the more I watch this video, the more likely it seems that some of these images came straight from the mind of Scheherazade. The clip was directed by Alex Wessely, who’s previously worked with Rihanna, Drake, and Big Sean. Accordingly, this video is as cinematic as any pop star’s would be. Don’t turn it off when the credits start to roll at 3:30, though, or you’ll miss the 20-second snowy showdown that kicks as an epilogue.