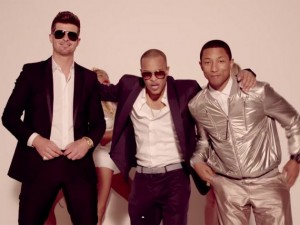 After months of legal back-and-forth, Robin Thicke and Pharrell Williams have been ordered to pay up $7.4 million to the estate of Marvin Gaye after a judge ruled that the pop stars ripped off the beat from “Got To Give It Up” for their hit single “Blurred Lines.” Attorneys for Gaye’s family will also seek an immediate injunction to halt sale and distribution of the song.

The steep compensation amounts to about a dollar for every copy the song sold, Washington Post reports. The single, among the biggest hits of 2013, ultimately earned $16 million in profits, with Williams and Thicke each walking away with a cool $5 million.

A publicist for Thicke released a statement admonishing the decision, and stating that it sets a “horrible precedent for music and creativity going forward.”

The lengthy trial suffered from its fair share of drama. In an interview with GQ, Robin Thicke stated that the Marvin Gaye tune inspired him and Pharrell to write “Blurred Lines” in half an hour.

However, during the deposition, he said he made the whole story up, because he was envious that Pharrell would get full credit for penning the tune.

Time to give credit where credit’s due, Robin: Marvin Gaye.