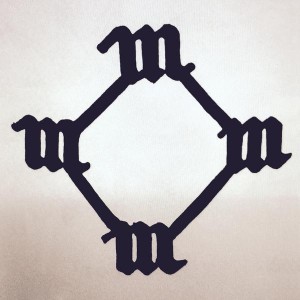 Aspiring Gap manager Kanye West has already begun applying for the job by adopting the Gap’s philosophy that nothing is more fashionable than predictability. His retreads of awards show interruptions, his contentious interviews in which he opines that people can’t handle his realness—all by now are as comfortably familiar as a pair of flat-front chinos.

Now he’s even out to remove the element of surprise from “surprise” album releases, debuting its songs one at a time on the way to revealing another album that sounds like Kanye West. It’s a strategy Kanye hopes to employ with his future Gap catalogs, showing you only the tease of a button-down collar before a month later giving you the full Oxford shirt.

That withholding of next to no information continued over the weekend, as Kanye shared both his new album’s title and what appears to be its cover art, lifting the veil of secrecy that had covered the approximately three remaining inches of this project. Really, it could hardly be called a veil. A lace trim, maybe.

So Help Me God seems to continue the collaboration Kanye and God forged onYeezus, in which Kanye shared some of his phone chats with Jesus about the difficulties of stacking his money. It’s possible Jesus’ dad offers some assistance on this follow-up, such as suggesting rubber bands. “That’s what I made rubber bands for,” God says. “Or at least, that’s what I made 19th-century British inventor Stephen Perry for.”

Of course, Kanye also famously declared himself a god on Yeezus. So it’s also possible So Help Me God finds Kanye reaching out to himself. Perhaps Kanye will find Kanye as difficult to deal with as everyone else does.

That deeply theological questioning continues with the album’s art, which at first glance appears to be a sort of Human Centipede constructed entirely of Ms. However, it’s actually a much weirder 13th-century monastic symbol representing the Virgin Mary, its baseball diamond-like shape symbolizing the time God looked at the Blessed Virgin and said, “Hey, if there’s grass on the field, play ball.” He then high-fived an angel.

As Pitchfork noted, this same album art was previously used in 2010 by the metal band Christian Mistress, on its record Agony & Opium.

The group has already issued a response on its Facebook page warning, “Lookout anyone who has this tattoo’d on them, you might now have yourself a Kanye tattoo!” Whereas previously, you had a really cool tattoo of a 13th-century monastic symbol for the Virgin Mary that was also used by a Portland-area metal band. How weird and embarrassing for you now.

Other than the debuts of “Wolves,” “All Day,” and “Only One,” the announcement of the title, and the first look at its art, very little is known about the remaining few details of So Help Me God, such as what its UPC code will be.