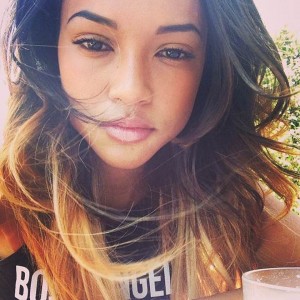 Just weeks after aspiring model and actress Karrueche Tran discovered that boyfriend Chris Brown is the alleged father of a 9-month-old baby by another woman, she sat down with Iyanla Vanzant in an OWN primetime special to discuss where their relationship currently stands. Though Tran has been blasted on social media many times for taking back the man who lied and betrayed her, she tells Iyanla in the above video how this time will be different.

“How did you find out he had a baby by another woman, that he’s not married to?” Iyanla asks Tran.

“Honestly, through social media,” Tran admits. She says that Chris tried to reach out to talk in person, but it was too late. Headlines like “Chris Brown Surprise … I’m a Father!” and “Chris Brown’s Baby Drama ‘Totally Blindsided’ Girlfriend Karrueche Tran” were everywhere.

Tran makes it clear that she’s not angry with the baby’s mother. “My issue is with myself and with Chris,” she says. “Not the baby, not the mother, not Rihanna, nobody. It’s me and him.”

Though they are longer a couple, Tran reveals she has spoken with Brown since their split. “He said he’s sorry, he’s dropped flowers off and tried to, you know, say sorry and be back in good graces,” she says. “He’s sorry for what he put me through.”

“And how can he possibly make that up to you?” Iyanla asks.

Iyanla gives the 26-year-old some tough love. “Not only what he put you through, but what you voluntarily participated in. Because Karrueche, you could have said no at any moment.”

“It’s definitely on me as well,” Tran admits. “And that’s why I said I let myself down.”

Iyanla asks if this four-year roller coaster ride of a relationship is really over. “Do you really think you’d ever go back to him?”

Tran takes a moment to think, shaking her head. “No,” she says. “Right now, I’m saying no.”