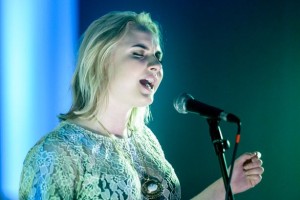 Bio: Låpsley (Holly Lapsley Fletcher) is a British singer-songwriter and electronic music artist. She grew up in Southport,Merseyside.

Having been part of a number of bands in the Merseyside area, Låpsley won the ‘One to Watch’ prize at Merseyside’s GIT (Getintothis) Award in April 2014, following over half a million listens of her solo bedroom-recorded Monday EP onSoundcloud. She played the BBC Introducing stage at Glastonbury Festival in June 2014 having been championed byBBC Radio 1 DJ’s Huw Stephens and Zane Lowe. Her track Painter (Valentine) was playlisted by BBC Radio 1 in September 2014 and received daytime airplay.

Låpsley signed with XL Recordings in October 2014. On the 30th of November 2014, Låpsley was revealed as one of acts on the BBC Sound of the Year 2015 long list. In December, Låpsley announced on Facebook that she will release her “Understudy” EP on January 5.