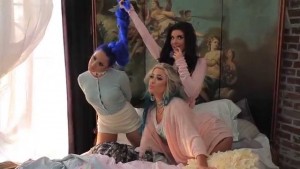 Ashley is free spirited, funny and loves to goof around.  She has a well rounded spectrum of interests, and believes that balance is her key to success. Her background in acting, commercials/films, is extensive and she has been very successful in the modeling world. When she was a little girl Ashley had a deep desire and passion to be in entertainment, and so during her senior year in high school she packed her bags, moved to Hollywood and has been a working artist ever since.

Growing up in New England, Ashley was an elite High School athlete, setting state and regional records in Track and Field.  This extremely competitive drive caused her to take a strong interest in healthy living, an interest that continues to this day.

Ashley brings an element of creative and abstract songwriting to the group.  She enjoys tapping into human emotions and expressing them through her music.  She loves losing herself in dance, playing guitar and pouring her vision into Syd Youth.  She has no fear in simply being herself.

If ‘too much passion’ was a crime, lock Tess up!  Before she could walk, her father had her sitting in the saddle of her first love, a horse.  Between “Cowboys and Indians” and racing barrels in Gymkhana’s and Rodeos, Tess had fearlessly roped in an addiction for adrenaline and freedom while living on a horse farm in Westcliffe, Colorado.  Bringing this life long love along for the ride, she followed her family to Sao Paulo, Brazil, Newport Beach, California, then spent her ‘rebel years’ in Naples, FL.

Growing up, Tess had always been a singer and knew at the age of 6 that she would spend her life building her talent and chasing her dream of pursuing music.  With passionate encouragement from fearless family members, Tess has never found a reason to believe in limitations.  Finding direction in who she is and what she wanted early on, motivated her to bring out the best in herself and everyone around her.  Through Halftime beat drops and her hard-hitting hooks, Tess brings a ‘go big or go home’ attitude to Syd Youth.

A culture chameleon, Sheela comes from a very diverse and artistic background.  She is half Taiwanese and half German, and having grown up in a French and Chinese speaking environment, she’s picked up many languages.  She uses painting, dancing, playing the piano, and photography as a means of expression.

She started taking ballet lessons while living in Bangkok but soon realized she was too hood for her own good, taking on a keen interest in hip hop.  Sheela’s stylistically urban songwriting skills contribute a New York-meets-LA vibe to the dynamic sounds of Syd Youth.

There is never a dull moment with Sheela,  from her high pitched laugh to her very easily amused self, she believes that positivity will shape the future.