Jonas will set out on a headlining run this spring, while Tinashe will be on the road in the summertime. 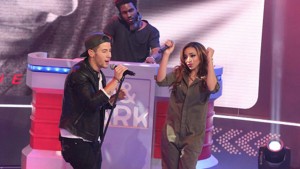 Following yesterday’s news that Iggy Azalea will postpone her Great Escape arena tour due to “tour production delays,” the scheduled opening acts for the scrapped tour, Nick Jonas and Tinashe, have announced that they will move forward with solo live runs in the coming months. Neither Jonas nor Tinashe will join Azalea when the Great Escape tour goes live in September, and new opening acts have yet to be announced.

On Tuesday afternoon (Mar. 10), a rep for Jonas told Billboard that the “Jealous” singer will announce a spring headlining tour soon, set to kick off after he hosts the Kids’ Choice Awards on Mar. 28. Jonas, who played a handful of solo shows around the release of his self-titled album last fall, personally confirmed the touring news on Twitter on Tuesday night.

Meanwhile, Tinashe posted to Twitter on Tuesday afternoon, “Unfortunately I won’t be participating in the Great Escape Tour, but I would never disappoint – I WILL be on tour THIS summer! DETAILS SOON!”

Originally slated to kick off next month, Azalea’s Great Escape tour will now begin on Sept. 18 in San Diego. The “Fancy” rapper’s label, Def Jam Recordings, says that “to accommodate for creative team availability and tour productions, it was determined that the tour will not be ready this spring.”