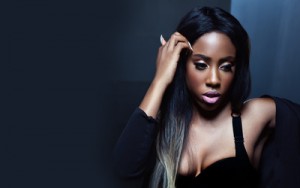 Bio: Amber Denise Streeter (born July 7, 1986), known by her stage name Sevyn Streeter, is an American rapper and singer–songwriter, best known for being a member of the girl groups TG4 and RichGirl where she was known as Se7en. In 2012, she changed her stage name to Sevyn Streeter.

Currently signed to Atlantic Records, her debut EP entitled Call Me Crazy, But… was released on December 3, 2013.