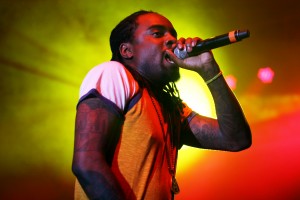 As promised, Wale debuts his new single ‘The Matrimony’ featuring Usher. Produced byJake One, the smooth track serves as the latest release from the MMG artist’s much anticipated third major studio LP ‘The Album About Nothing’.

Wale has seen previous success (see ‘Bad’ and ‘The Body’) from teaming up with R&B singers and he follows that same exact formula on ‘The Matrimony’. Usher mans the hook, singing “Baby don’t worry, I’ve got plans for you”, backed by two solid and fitting verses from Wale. Other features we can expect on ‘TAAN’ include names such as J. Cole and TDE’s SZA.

‘The Album About Nothing’ is scheduled to impact at the end of the month on March 31st. Comedian Jerry Seinfeld has played a big role in assisting Wale on the completion of the project; in fact the listening session was even held at the same diner where ‘Seinfeld’ was frequently filmed. Look for ‘The Matrimony’ to be available for download on iTunes.