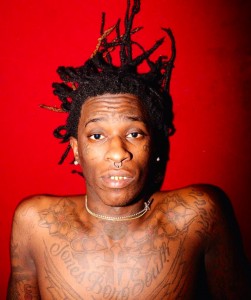 Bio: Jeffrey Williams (born August 9, 1991), better known by his stage name Young Thug, is an American rapper fromAtlanta, Georgia. He is known for the single “Stoner”, as well as his collaborations with fellow Southern rappers, such asRich Homie Quan, Birdman, Waka Flocka Flame, Gucci Mane, Young Scooter, Shy Glizzy, Migos, Travi$ Scott and T.I.Young Thug signed a record deal with Gucci Mane’s 1017 Brick Squad Records, an Asylum/Atlantic imprint, in early 2013. He gained major recognition in 2014, after being featured on a string of singles, including “About the Money” and “Lifestyle”, the latter of which peaked at number 16 on the US Billboard Hot 100 chart.