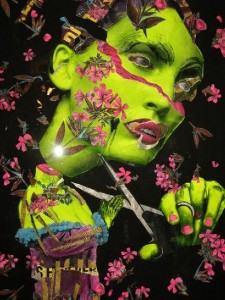 It’s been a spectacular year for NYC street artist Judith Supine. The mysterious artist’s work covers the streets of  Willamsburg, Brooklyn and beyond. In an unlikely turn of events, Supine unmasked himself at the Mecka Gallery exhibit of “Golden Child”. The work presented florescent transgendered twins with cigarettes for “members”.  Fans were given the opportunity to speak with the mystery man and many were shocked to see Judith is not a woman.

His name  was an attempt to pull an epic prank on his mother. While Supine is known for controversial and sometimes unlawful art… his mother’s name “Judith Supine” is what is displayed.  No report has been issued on how she took the joke, nonetheless, he is unusually gifted. His eerie, acid-looking art oozes everywhere, from river floats, brick-faced residences and New York bridges.

Recently, Supine and his trippy art were dangling from the top of the Williamsburg Bridge. This event was classified as criminal trespass and reckless endangerment. He dodged authority’s briefly before turning himself in.  A rebel. Supine is not confined by what society says to be acceptable, nor does he look to trends for guidance.  Using inexpensive paints, recycled materials and the ordinary man’s trash, he creates extraordinary art.

Supine is an individual… an artist. He represents an awakening in a generation that typically looks to follow like sheep. His art goes against the grain and denies general preference, so sit back and enjoy the show.

Keep up with Judith Supine: