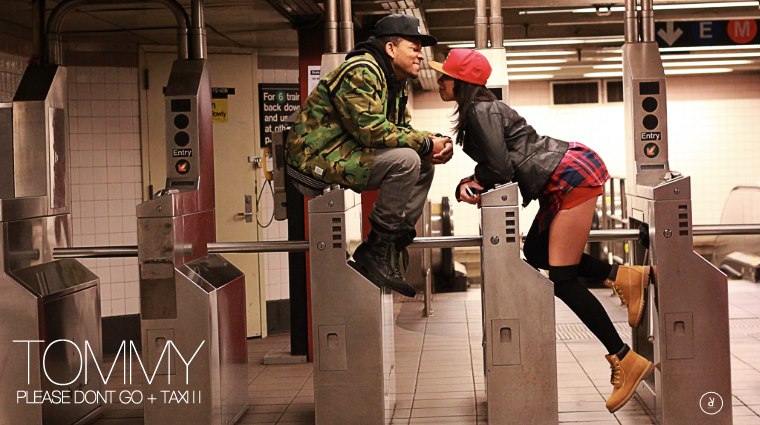 In a mainstream realm where it is not popular to speak on the misfortune of urban communities, government injustice or worldly issues Tommy Fly Guy elaborates on just that. His captivating image and widespread E.P.’s Rough Drafts, Diary of a Stoner and Will Rap 4 Food, demonstrate that there is still substance amongst the new generation. Tommy Fly Guy the FLY BRIGADE  CEO and military brat from Capital Heights, Maryland was brought up in a no nonsense manner. His single mother was hell-bent on never having her son become a product of his environment. “I lacked a father figure. He wasn’t around until I had to move in with him,” says Tommy Fly Guy. Carrying a chip on his shoulder, Tommy Fly Guy dug deep within to inspire himself. “I felt not too many understood me and I had to channel built up anger into writing therapy, a written testimony. Hip-Hop was influential in my younger years for the simple fact I was born in the late 80’s,” said Tommy Fly Guy.

Hip-Hop pioneers such as Snoop, B.I.G., Tupac, Nas and Scarface were his early influences. Fascinated by the Hip-Hop culture and style, Tommy Fly Guy began going to a friend’s home studio to record music late at night. Tommy Fly Guy said, “I would bring my demos to our high school the next morning. Soon after, Lil’ Wayne’s Squad Up mixtapes dropped and it was a wrap!” He started filling up notebooks with rhymes and ideas. One of Trey Song’s songbook writers Spru began giving music advice to Tommy Fly Guy; as well as insight on how to pursue his dreams. After headlining at DC’s LOVE nightclub and Virginia’s bulbous club Mansion, Tommy Fly Guy’s songs from his EP Frequent Flyer soon started playing on the local radio stations.

The independent label FLY BRIGADE now obtained run-of-the-mill recognition. “FLY BRIGADE means everything to me. The FLY is short for Forever Love Yourself and BRIGADE is an army term for a unit of soldiers; my soldiers, I would go to war with, it means a great deal,” said Tommy Fly Guy. A reason Tommy Fly Guy is different from other artist outside of his impressive tattoos, is his musical scrupulousness. He doesn’t create what is commercial; he allows listeners, old and young to relate. “Growing up I was the only child and moved around a lot so watching music videos was how I learned the Hip-Hop culture. I remember watching The Fresh Prince and I could identify with Will Smith. He owned the same Karl Kani outfit with the J’s, to having big ears and high-top fade; to reciting raps from Public Enemy, Biggie and Tupac,” said Tommy Fly Guy.

“I just want people to know that a lot of time goes into perfecting my craft and even though I’m nowhere near where I want to be. As an artist, I’m not going to stop and I thank everyone for their support so far,” said Tommy Fly Guy. His latest E.P. #WeWorkin has the much anticipated visuals to “Taxi 2/Please Don’t Go” by buzz worthy creative director Donny V. As well as, the video to “Shine” is on the way which was produced by Cardo of Taylor Gang. The cool, calm, collected MC is a well-dressed charmer. Tommy Fly Guy is known for being a lady’s man but he is still rough around the edges. He is a versatile MC who won’t stop until everybody knows the name FLY BRIGADE!

Keep Up With Tommy Fly Guy: