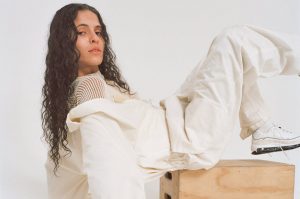 20-year-old New Jersey rapper 070 Shake inked her deal with G.O.O.D. Music in 2016, but the newcomer is enjoying a breakout moment thanks to back-to-back appearances on Pusha-T’s hard-nosed DAYTONA and Kanye West’s divisive Ye.

She’s not stopping there: Chapter 2, her LP with the 070 Project collective, is expected later this year, and the MC recently released her own EP, titled Glitter. The set’s Spanglish-fused single “Mirrors” found her facing off with her inner demons, and 070 Shake’s tracks delve into everything from career highs to mental-health struggles, as well as the stigma associated with asking for help.

You spent the last few weeks in Wyoming for the creation of Ye. “Violent Crimes” is one of Kanye West’s most insightful tracks — and it seems to signal a shift in his perspective on women. How did it feel to be apart of that?

Look, it feels good. I love being apart of [music with a message], no matter who it is. My goal is to be able to impact people in a positive way. So that just made the song that much better.

Kanye West recently disturbed many of his loyal fans with his tweets about his political views. Given how closely you work with him, what can you tell us about the “free-thinking” Kanye?

I think Kanye West inspires everybody that he is around because he is so himself. Like, everything that he shows is everything that he is. It has encouraged me to be more free with my thoughts. So I think it is inspiring to see somebody like him. Kanye is going to say what he feels, take it or leave it. Everybody has bad thoughts, evil thoughts. The only difference is that he says what he thinks. Still, we all have those thoughts. I feel he is definitely a good person. Kanye West is very kind and has given me the opportunity of a lifetime. I am grateful to him.

When are we getting more music from your crew, the 070 Project?

Well, definitely by the end of the summer. Now it is crunch time. I’ve been gathering myself, my new knowledge, and processing everything that I have taken away from being around musically inclined people. I just want to make a bigger sound. There will definitely be new music [by] June 14th. The 070 [Project] is dropping music all summer. We are also going to be working on a project together, which should be released by December. There is a lot that is going on music-wise.

Listeners are used to your raspy rhymes, but you sang in Spanish on Pusha-T’s Daytona track “Santeria.” How did that come about?

I came in, and Pusha T told me, “Yo! [Take a listen.]” It was crazy, because they needed a female vocalist, and the team played me the sample. I heard it, but it was in Portuguese. I was going to [originally] record in English. After I heard the sample in Portuguese, I became inspired. I thought, “Damn, maybe I should do this in a different language.” I suggested I try it in Spanish, and they told me, “Oh, hell yeah! Try it in Spanish!”

Outside of music, you’ve modeled for Gypsy Sport and Mugler. What will you tackle next in the fashion world?

I am looking forward to doing more in the fashion world and being on all types of platforms. I will be in Europe through all of July. On that scene is where I’ll really be [delving into more] fashion. We are trying to establish a presence at all of the fashion weeks. So, keep an eye out. But I am just in the music world right now.

You’re a queer artist and have been open with fans about your relationship with Sophia Diana Lodato. What does LGBTQ representation mean to you?

To be honest, it does not really mean much to me. Because I do not see myself as being gay or being straight. I just like to see myself as who I am. I feel like when I get too into those kinds of titles, it kind of separates me from everything. And, [then] that’s all I am.

Now that Glitter is out, what do you hope to convey on your upcoming debut album, Yellow Girl?

You’ve cited Kid Cudi and Kanye West as your favorite artists of all time. How surreal was it for you to collaborate with them both on “Ghost Town”?

[“Ghost Town”] was walking into where I am supposed to be. Everything is just flowing effectively. I feel as though I am where I am meant to be in life. It is literally walking into my dreams.

Kid Cudi has been really active in tearing down the stigma surrounding mental illness. On numerous songs, you’ve highlighted bouts with depression. How has songwriting helped you overcome it?

It is very therapeutic. So, instead of talking to someone, I am sort of fixing my own issues, by myself. Writing is kind of like talking to someone. I am not always going to have that [outlet] by me. So, this is a way to let it all go.

What have you learned recording under G.O.O.D Music?

Oh, damn! This is a sticky situation right here. [Laughs] I won’t say who is my top 5, but I will say Francis and the Lights is fucking awesome. Shit, I do not want to exclude anybody. At G.O.O.D. Music, everybody is an Avenger. I appreciate everybody at G.O.O.D. Music because they are all a vital part of the big picture.