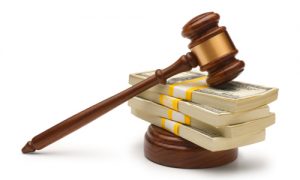 More money, more problems – and your favorite celebs know it all too well. Whether they were battling a longtime friend, defending their creative freedom or reprimanding a journalist – we’ve lined up the times these Latinx stars had to protect the check.

When “Loca” played in the club, everyone was dancing, except songwriter Ramon Arias Vasquez. He claimed to have created the Shakira hit and filed a copyright infringement lawsuit against Sony/ATV Latin and Sony/ATV Discos. While in court, the judge discovered that a cassette tape that Vasquez presented as evidence was bogus. The New York lawsuit was tossed out, and Vasquez was sent off in Sabado Gigante fashion. Y fuera!

In the ‘90s, the Terror Squad was untouchable. So, it was a sad day in hip-hop when rapper Fat Joe and the late Big Pun’s widow, Liza Rios, were in court lawyered up against one another. In 2014, Rios claimed she had not received money from Big Pun’s music profits (she and Joe allegedly agreed to split) since 2005. Bossip reported that Ali Adawiya, a music royalty expert, said Big Pun was “underpaid by at least 2,076,093.” The terms of their settlement remain confidential.

“I got it locked up like Lindsay Lohan,” was the Pitbull punchline that resulted in a defamation lawsuit, by Lohan herself.  She claimed Mr. Worldwide and NE-YO’s “Give Me Everything” caused her emotional stress. However, contrary to her unpopular belief, her frequent run-ins with the law were public knowledge, and not a violation of her privacy. Pitbull filed a countersuit for Lohan playing herself.

Yes, there are matters of public interest. No, you may not report rumors of homosexuality! Paulina Rubio’s sexuality has been in question for years. However, the European Court of Human Rights ended her lawsuit (that lasted over a decade), earlier this week. In 2005, Rubio’s former manager granted interviews to press in Spain. Her possible bisexuality was discussed. As a result, Rubio sued her former manager, the TV station as well as the hosts. In 2007, a Madrid judge dismissed the initial case. Still, ambiguity remains, and Rubio returned successfully arguing her “right to respect for privacy and family life” was violated. Touché.

Some men just don’t know how to let go. In the case of biting the hand that once fed you gone bad, Jennifer Lopez won big in appeals court. Her first husband, Ojani Noa, attempted to violate his prior settlement with Lopez – which prohibited him from detailing their short-lived romance in a book. Noa reached for a loophole. He proceeded to work on a film alongside Telemundo titled “I Owe JLo.” J-Lo issued cease-and-desist letters, to Noa’s then business partner, and film producer Claudia Vazquez. Vazquez responded with a 10 million dollar “interference” victory in court. Still, Lopez didn’t turn away. She fought to have the judgment reversed and was successful.