Over the nostalgic beat of “Mutual Butterflies,” the singy-rap of Ryan Trey positioned him as a threatening combo artist within the independent circuit. The teenaged newcomer’s iambic voice echoed the smooth texture of the artist that co-signed him: Bryson Tiller.

Tiller’s notable Twitter praise powered an upsurge of streaming numbers on Trey’s recently released debut EP, August, which enabled the melodist’s ascent to mainstream. With his eyes set upon the big league, his flow over the song, “Bradley Beal Freestyle,” introduced his unique upbringing between St. Louis and Washington, D.C. to a growing fan base. The lullaby, “Evolving, Pt. 1,” samples Sabrina Claudio’s, “Confidently Lost,” and illustrates Trey’s metamorphosis into manhood musically. To Trey’s credit, lecherous songs such as  “Break on Monday” and “Temptations” have already proven to woo new listeners.

Billboard connected with Ryan Trey following the filming of his “Temptations” video to discuss his fresh ambitions. Beyond the MC’s ability to finesse his new flames with dazzling wordplay, his conscious records provide strong imagery, adding to his core strengths as an artist. Check out the conversation below.

On the single “Temptations,” you repeat, “Temptation I can’t do it, shorty.” Can you elaborate on what this means?

I was in the most vulnerable part of my life. [I was] in a relationship that was somewhat shaky. I feel like when there are holes in the relationship; water can leak through. Some girls were trying to get at me. It was just tempting in a sense. [The song] was me talking about whether I wanted to act on that or not.

You’re becoming acclimated to the limelight at 19. Have you indulged in temptation against your better judgment?

I don’t think as far as when it comes to me being in the industry, [I’ve indulged]. [Not] when music is involved. No, I think it’s more so in my personal life, like at home, or just being in my hometown. Again, women from my city were trying to get at me when I was in a relationship. Those experiences come through in songwriting.

In the “Temptation” video, your eyes turn grey. What does that signify?

It signifies just being under the spell of temptation. Once she put the blindfold up over my eyes, it was like she had me. It was almost like a sunken place of like lust, in the sense of seduction.

Who are your top musical influences from your St. Louis stomping grounds?

I mean there are not really a lot of [influencers] in St. Louis. Still, I have to say, Nelly, of course. I grew up in D.C., too. Like, half of my life was in St. Louis and the other half was in [the nation’s capital]. So if there were anything from Maryland or the DMV [I found inspiring], it would have to be Wale. Also, the go-go style of music.

You recently independently released your 13-track debut project, August. Where do you feel this EP positions you within the R&B genre?

I think it is kind of a fresh introduction. It’s [representing] what I’ve been experiencing for the past 19 years. It just [plays through] the past couple of years in-depth — recently with women in my life, my family, and just the things I’ve been through. [This includes] obstacles and just my different emotions overall. 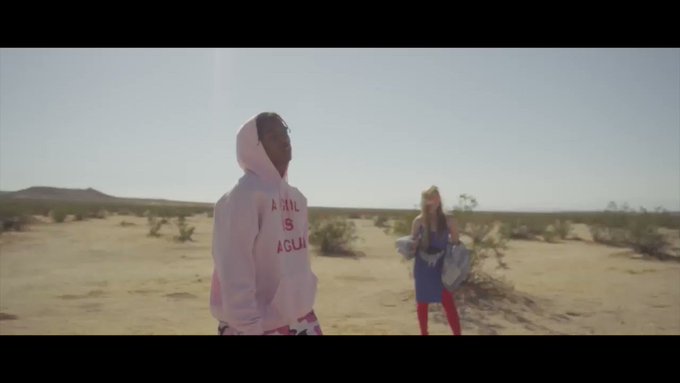 Last year while i was on tour there was this kid who was traveling with us on the bus. didn’t find out until later that he made music and its a vibbeee. this is his song “Mutual Butterfies” @Ryantrey

Bryson Tiller has co-signed your artistic vision, most recently on your song “Mutual Butterflies.” What does it mean to have his support?

That’s crazy. He is a very established artist. That’s somebody that I look up to. [Tiller is] somebody that’s helped mold my style. It’s just cool to be able to have that type of co-sign. He is somebody that’s really changed the R&B genre, [even] the hip-hop genre — things like that in the mainstream. This whole T R A P S O U L element everybody’s [on], this wave, you know, that’s all him. I feel he started that. So, that’s dope to hear it from him.

Will you be joining forces in the studio with Pen Griffey?

I think that we move [around frequently]. We have both been working. So, you know, there have been different songs and things we’ve worked on, of course. Yeah, I’d love to work with Tiller. I can put out [a single] if the opportunity presents itself.

There is a viral buzz surrounding the tracks, “Bradley Beal Freestyle,” “Matte Blvck,” and “Evolving, Pt. 1.” Which song do you feel best represents you to your growing fanbase?

I think “Bradley Beal” does. I named it “Bradley Beal” because Bradley Beal went to a high school called Chaminade in St. Louis. He plays for the Wizards in D.C. [The song] just kind of reflects my life. You know? The way I grew up. I lived half my life in D.C. and a half in St. Louis. So, I think that would probably be the track that relates to me the most. So, location-wise, we came from the same places.

You credit yourself sonically to be reminiscent of younger Drake, and J. Cole. How so?

Those are two artists that I’m inspired by. Also, those two rappers have changed the game like crazy. So, I think [there are] little elements I can take from them. I’ve learned from them. With those being like two greats, Drake and J. Cole helped enhance my sound, as an artist.

What can fans anticipate from Ryan Trey?

From now until the top of next year, [there will be] a lot of music coming out. I have a new project I’m working on. It [contains] a lot of different new sounds I’m trying to create. With this [effort, there will be] new people involved, different artist, and new features. 2019 will have so much music. Right now I’m just in the creative process. I am putting things together. Still, [it will be here] soon. [It is coming] in the near future. I’ll definitely have something that I will be able to share with my fans.