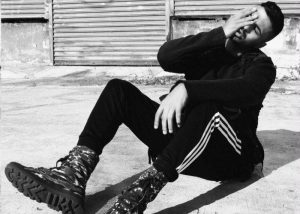 Rev up your engines! Hip-Hop artist Alvaro Diaz is racing laps toward his dreams of becoming a household name after the release of his EP, San Juan Grand Prix.

The up-and-coming emcee is finally being acknowledged in Puerto Rico’s music scene. After much success in South America and Mexico, Diaz’s San Juan Grand Prix burned rubber over other Latinx rap newcomers. The veracity of his No. 1 iTunes Latino charted play-through compilation cannot be overlooked. Also, Billboard debuted the 27-year-old’s project at No. 4 on the Latin Rythm charts. The unpredictability of San Juan Grand Prix is loaded with Spanish-language bars that warned Caribbean rap kings he is not prepared to go away or stay in his lane.

You have an interesting introduction to music. Can you walk us through your journey?

I got kicked out of my school and had to transfer. At the time, Eminem released “8 Mile,” and the kids at my new school were rapping. What everyone in Puerto Rico was doing was freestyling, like in the movie. Every day my peers battled, but I was so shy – I initially didn’t have the courage to do it. I made friends with one of the kids [from school] and began ghostwriting. I saw people’s reaction to my work and that inspired the beginning!

I would do everything to perfect my craft — watch documentaries, save my lunch money. I saved all the money I received for Christmas, or from family, for studio time. [Laughs] The money I earned on my own went toward my studio equipment. A close friend taught me about the music programs I needed to download to record myself. I dedicated my life to this! A few years later, I almost got my first record deal.

Wow! Are you self-taught entirely?

Yes, a lot of people said they were going to help me, but never helped me. After I understood production, I got a Canon camera. I learned how to direct my own music videos. I edit all my work and don’t wait for anybody.

Your new video for your single “Montecado De Coco” has a lot of old-school-looking camera shots. What was the message with it visually?

My first message is to always have fun. If you’re not having a great time doing what you’re doing, you’re wasting your time. The director found an older camera. I believe the vintage feel makes it special, like the woman in the video. I wanted to convey that she wasn’t like anyone else, nor is video itself. We weren’t aiming for perfection; everyone loved how real and raw it was.

You’re frequently highlighted as a trap artist — San Juan Grand Prix is energetic. Still, a lot of your music, such as, “Todo Bien” or the “Montecado De Coco” video, has a laidback feel. What can fans anticipate with your versatility next?

Fans can expect a lot of new singles. Remaining an independent artist allowed me to do what other people can’t because they’re in the trap with somebody. I’m not in the trap with anybody, but I’m still on the radio. Maybe now I’ll begin doing collabos.

You hear of a lot of reggaetoneros come out of Puerto Rico, what made you decide to make more trap music?

It’s still hip-hop, but it didn’t exist here on the island. I listened to Gucci Mane, Young Jeezy and others. I am just a really big fan of hip-hop, but my sound can even be considered a bit more alternative. Nothing about the engines on San Juan Grand Prix were traditional. I mix it all! Artists in Puerto Rico use trap beats now, but a lot of people say, “Man! Alvaro was the one who started this.” [Laughs] Now they’re doing reggaeton on trap beats. We call it trapeton!

What separates you as a hip-hop artist from others rising?

My concept of writing is really different. I love old-school quality music. As we know, I have heavy usage of metaphors and punchlines. I don’t just to say things to say them. My music is purposeful because the style is uncommon in Puerto Rico. I am just trying to be me. I arrange my beats, and that’s why all my music sounds like Alvaro music.

Inspire! That’s the main goal, always. To aim to do better, to go after your dreams. I was told, “You need a record label to pop. You can’t do it alone. You need a music video director. You can’t shoot your videos. You can’t record on your own.” And yes, I can! This has been me and my friends. We didn’t originally have a great studio. But this was my dream, so I went after it. My message to young Latinos is you can’t wait for anybody. Just do it! My album should be out by the fall.

Watch Alvaro Diaz romance his lady on the beach in “Montacado De Coco” above.