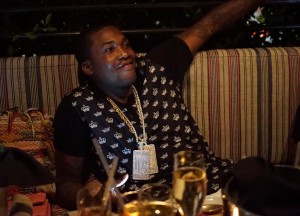 Funkmaster Flex went on another kufi-smacking rant this evening. Hot97  is well-known for Flex’s  classic hip-hop spins, and verbal violations. However,  after Power 105‘s Charlamagne Tha God snatched Flex’s soul earlier in the week, New York City has been antsy. Not only did Charlamagne refer to Flex as “Pump faker Flex,” he crowned him, ‘Donkey of the Day.’

It seems Charlamagne and his longtime rap rival Drake have become rather chummy. Drake AKA Champagne Papi, even sent cases of champagne to Power 105, following Charlamagne taking his defense on-air. Flex heated over the alleged lack of lyricism raved on Hot97.  He mentioned having Drake’s reference tracks from an Atlanta artist, Quentin Miller. Hot97 did not deliver the complete catalog of Miller references tracks, nor the Meek Mill diss track they promised. Hip-hop fans gathered around their radios like old times and went to sleep salty  – both nights.

Drake amused by Meek Mill’s social media attacks responded swiftly, on songs, ‘Charged Up’ and ‘Back To Back.’ Meek Mill screamed how Drake “didn’t write his rhymes,” while OVO fans resounded, “We don’t give a f*ck!” Finally, the rap gods opened the Twitter floodgates and delivered the moment everyone who didn’t live under a rock was waiting for – the damn Drake diss! Well, click above and stream away; let us know what you have to say.